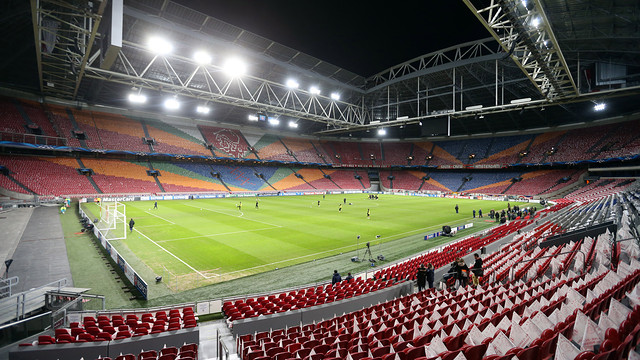 A draw in FC Barcelona’s first ever official visit to the Amsterdam Arena (20.45, La 1 and TV3) would be enough to secure first place in Champions League Group H

Barça are missing severa lplayers, even though Xavi returns, with youngsters Adama, Dongou, Sergi Gómez and Patric all travelling to Holland

The Amsterdam Arena is the venue this evening for the first ever meeting in an official match between Ajax and FC Barcelona on Dutch soil (20.45, La 1 and TV3). In a stadium where football is enjoyed to the full, the Catalans have a chance of sealing top spot in Group H. With qualification already secured, Barça need at least a draw to guarantee being seeded and playing the second leg at home in the first round of the knockout stages. For Ajax, the game is far more urgent. Defeat combined with an AC Milan win in Glasgow would leave them with no hope of making it into the last sixteen.

Barça go into the game with several absentees. The latest is Adriano, although it is a relief for Tata Martino to be able to welcome Xavi back into the squad. He has also enlisted the help of four reserve team members, Dongou, Sergi Gómez, Patric and Adama, the latter fresh from his first team debut at the age of just 17 years and 10 months. With all of Alba, Alves and Adriano unavailable, Puyol may have to play at full back, a position where he has ample past experience.

It seems too extraordinary to be true, but this game is the first ever visit by Barça to Amsterdam for an official fixture. The Dutch and Catalan outfits may have met in numerous friendlies, the last one in 2002, but they have never been drawn together in an official UEFA competition. This is also the first time Barça have been to the Netherlands since they met PSV Eindhoven in the group stages in 1997/98 (2-2). In the meeting between FCB and Ajax at the Camp Nou earlier in the competition, the side coached by former Barça man Frank de Boer lost 4-0, the home team’s goals scored by Messi (3) and Piqué.

The Ajax manager confirmed in his pe-match press conference that neither Bojan Krkic nor Siem de Jong will be playing on Tuesday night.