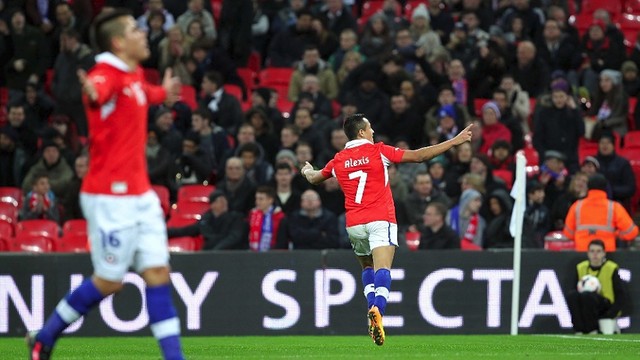 A total of eleven members of the first team squad are away on international duty.  Song and Sergi Roberto were both involved in competitive matches while the rest took part in friendlies.

Alex Song: 90 minutes
The Cameroonian will be feeling on top of the world after helping his country reach the World Cup finals thanks to a 4-1 defeat of Tunisia in the second leg of their tie in Yaoundé.  The Barça midfielder had a good game and was a steadying influence on the Cameroon midfield.

Alexis Sánchez: 90 minutes and 2 goals
Man-of-the-match Alexis got both goals in Chile’s shock 2-0 defeat of England at Wembley.  He opened the scoring with a header and then followed up with a subtle chip over the advancing keeper to round off a lethal counterattack.

Neymar: 66 minutes
Neymar played 66 minutes of Brazil’s comfortable 5-0 win against Honduras in Miami.  He was involved in the build-up to one of the goals and was the target of some uncompromising tackling.

Marc Bartra: 90 minutes
The central defender made his full international debut for Spain in a friendly against Equatorial Guinea (1-2).  He partnered Iñigo Martínez for the opening 80 minutes and played the remaining ten minutes alongside Sergio Ramos.

Sergio Busquets: 48 minutes
Sergio started on the bench but came on for the injured Xabi Alonso in the 42nd minute.

Andrés Iniesta: 34 minutes
Andrés came on in the second half for Atlético Madrid’s Koke and was given a standing ovation by the spectators in Malabo.

Pedro Rodríguez: 25 minutes
The Barça winger came on for Navas for the final 25 minutes of Spain’s win.

Sergi Roberto: 90 minutes
The midfielder played the full 90 minutes in Spain’s 6-1 rout of Bosnia in an under 21 European Championship qualifier.