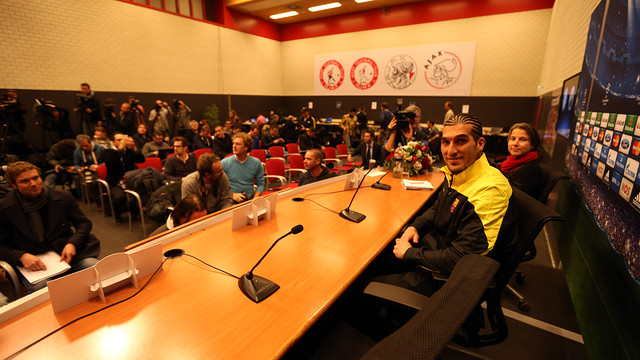 “As long as I feel in form, I want to keep playing football and renewing my contract”, said the FC Barcelona goalkeeper

The injury to Víctor Valdés means José Manuel Pinto is currently keeping nets for FC Barcelona. After a clean sheet against Granada, Pinto is looking forward to Tuesday’s Champions League game. “Víctor is the most in-form goalkeeper around and it’s a challenge to take his place” says the Barça stopper. “But it’s a challenge I welcome and I’m using it as an opportunity to grow”. The player has appeared at the Amsterdam Arena before, when he was at Celta, and told his press conference that games at this venue “are always very nice and special, although they’re even nicer when they’re in the Champions league”.[[CITA_1]]

Pinto does not see these games as a chance to earn a renewal of his contract. “I’m just taking it as a reward for all my hard work, my commitment to training and all that effort, I have nothing to prove and don’t feel like I’m being observed” he said. “As long as I feel like I have my form, as I do at the moment, then I want to carry on playing football and renewing my contract. I like to take each day as it comes, and right now what I have to do is work … Ever since I have been at Barcelona, my contract has renewed itself, and that’s always been because of my hard work, and staying focused”.[[CITA_2]]

As for Ajax, Pinto admits that the only player he knows particularly well is Bojan Krkic, his former team-mate, but he is still wary of the Dutch outfit. “Against any team in the Champions League it is dangerous only to think about one player” he said. “If they’re playing in Europe, it’s because they have lots of quality players”.

Víctor is the most in-form goalkeeper around and it’s a challenge to take his place. But it’s a challenge I welcome
As long as I feel in form, I want to keep playing football and renewing my contract