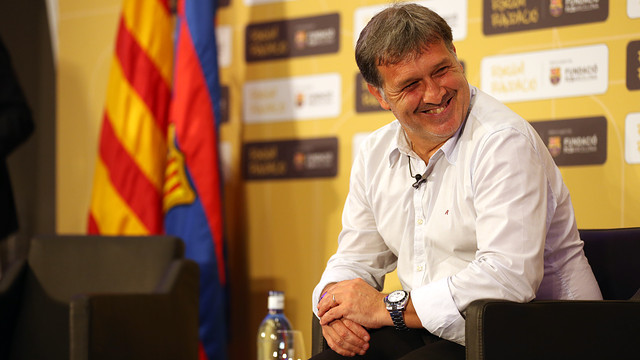 Martino admitted that he’s residing in a hotel, that the pistachio coloured polo he wears at home matches was a gift from his wife and that he enjoys movies, especially of the crime and suspense variety

Rexach: “Tata transmits tranquility and that’s crucial. From the outside it seems that he doesn’t get nervous, that he dominates situations”

On the FC Barcelona manager, Carles Rexach said: “I like him because he’s a normal manager and that’s important. He transmits tranquility and that’s crucial. From the outside it seems that he doesn’t get nervous, that he dominates situations.”

Tata Martino was the guest of honour in the third discussion of the Foundation Forum, the first one held this season. The FC Barcelona manager shared the stage with former Barça player and manager Carles Rexach in a discussion titled “The Barça Bench.” Martino and Rexach entertained the audience gathered in the Sala Auditorio 1899, among whom was President Sandro Rosell.

“Barça are big team and it’s very difficult. It’s bigger than one might imagine from the outside and the day to day work is complicated. There’s no time to relax and you always have to try to win,” said Martino. What’s surprised the manager the most up until now is the apparent need for a crisis: “Someone is always looking for a crisis. When the results are good and above discussion, I imagine that’s when these type of debates on ball possession, Neymar, etc. appear.”

Martino, who noted that he had visited the FC Barcelona Museum a year prior to his appointment to the Barça bench, said that he’s been a Barça fan for years. “In Argentina we’re very interested with what happens in Europe, and especially in Spain. We’ve followed the entire evolution of Barça. The team have adopted a very active style of play. I’ve seen it many times while sitting in front of the TV. Now that I’m here, we have to respect that style,” explained the manager. He added: “It was important to me that we recover various tactical variants that Barça have used in the past.”

Martino admitted that his move to Barça has been like a fairy tale and that’s one of the reasons he demands the most of himself in his new role as head manager: “Being Barça’s manager is a very important challenge and sometimes I tell myself that I have to be up to the task. You sleep well when you win but the next day you have to focus on the next opponent.”

“I’m impressed with how the players train. I admire, for example, how they do a dimple rondo. If you don’t watch and only listen to the sound of the ball, you realise that it’s a a very quick and constant sound,” said a smiling Martino. The manager added that he’s still residing in a hotel, that he’s a fan of movies, especially of the crime and suspense variety, and that the green polo he wears at home matches was given to him by his wife. “I’m starting to see the pistachio colour a lot!,” he exclaimed.

Lastly, Martino said that he believes Atlético Madrid are a strong contender for the title, that Puyol is training well but that he’ll approach his return to competitive football with caution, and that he’s looking forward to the first Clásico of the season: “One always imagines what a Clásico is really like. However, I have the obligation to think about the matches that come before it (Osasuna and Milan). It would be incorrect to think about Real Madrid.”