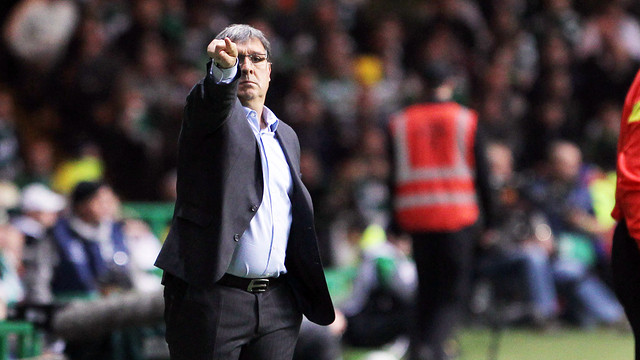 The Barça manager believes that Barça played one of its best matches of the season this evening, away to Celtic

Gerardo Tata Martino was pleased with his team’s performance this evening in Celtic Park after the 0-1 victory over Celtic FC. “It was a fairly complete performance, we played with a lot of consistency. With the exception of Valdés’ save (min 72) we almost didn’t have any problems.” He then echoed Cesc’s post-match statements: “Because of the characteristics of the game, because it was a Champions League match… I agree with him that this has been our most complete performance of the season.”
[[CITA_1]]
“They were well aware of last year’s match and they tried to do the same thing. We had the possession and we circulated the ball quickly. The only thing we lacked was that we were unable to clearly break into their area,” said Martino. “Other options appeared after Cesc’s goal.” The FC Barcelona manager was also pleased with how his men varied their tactics during the game: “Any team with a defensive posture has problems when their opponents change tactics.”

Barça’s collective performance was good, and some of the players put in standout performances. Martino was quick to praise Marc Bartra: “He played an impeccable match. He went up against their best player (Samaras) and he did a good job.” He also heaped praise on Neymar: “We didn’t need a game like this to know how good he is.” When asked about Brown’s red card, Martino said that he was too far away to judge the play.

Because of the characteristics of the game, because it was a Champions League match… I agree with Cesc that this has been our most complete performance of the season