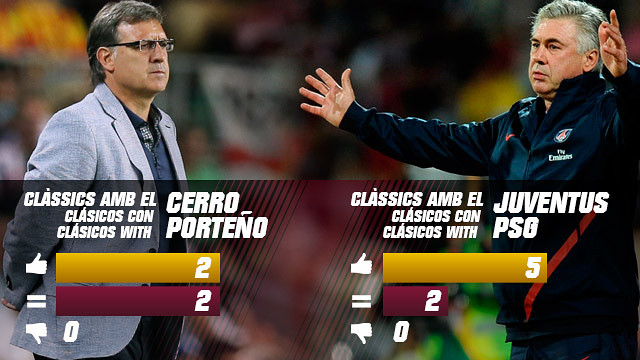 This Saturday’s match will be the first Barça v Madrid for both managers, who have managed in grudge matches in Paraguay, Italy and France, respectively

Juventus and PSG didn’t lose any of the seven matches played against Inter Milan and Olympique Marseille, respectively, with Ancelotti on the bench

Gerardo Martino and Carlo Ancelotti will lead their respective teams in their first Clásico this Saturday. It won’t, however, be their first big rivalry match. The Barça manager has featured in four when he managed in Paraguay and Ancelotti has featured in a total of seven during his time in Italy and France. What’s particularly eye opening is that neither of the managers have lost a big rivalry match.

Tata Martino experienced the rivalry between Newell’s Old Boys and Rosario Central as a player, but never as a manager. In the 2012/13 season, when Martino managed Newell’s, Rosario Central played in Primera B Nacional.

The now FC Barcelona manager did get to experience grudge matches between Platense v Argentinos Juniors and Colón v Unión. However, none of these matches are considered to be the superclásico of the country, as that’s reserved for the classic match between River Plate and Boca Juniors.

We have to go back to 2004 to find Martino’s first big rivalry matches as a manager. When he was at the helm of Cerro Porteño, he led his men to two one-all daws against Olimpia in the 2004 Apertura. In the Clausura, Tata won both matches, by 3-1 and 0-1. That season, Cerro Porteño were champions after winning the Apertura and the Clausura.

Three victories and one draw in Italy

Carlo Ancelotti missed out on the big Italian rivalry when he was a player. The footballer featured for Parma, Roma and AC Milan, meaning he never got the chance to experience an Inter v Juventus match, the game that’s considered to be the biggest grudge match in Italian football. As a manager, however, he did get to experience the Derby d’Italia. From 1999 to 2011, Ancelotti experienced four Inter-Juve derbies, and his record stands at three victories (1-0 and 1-2 in the 1999/00 season, and 3-1 in the 2000/01 season) and one draw (2-2 in the 2000/01 season).

Having not featured in any massive rivalry matches during his tenure at AC Milan and Chelsea, Ancelotti was made to wait for more than ten years to experience another one. It was in France, as PSG’s manager, when he arrived in January of 2012. That season he led his team to a 2-1 victory over Olympique Marseille. The following season PSG tied 2-2 away to Olympique Marseille and defeated them at the Parc des Princes (2-0).