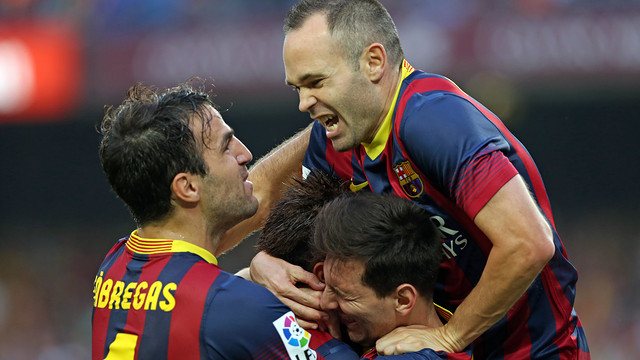 The midfielder highlights the talent and quality of Alexis and Neymar

“We played better than Madrid. We weren’t brilliant but we saw a good Barça,” says Xavi

The first team will return to training this Sunday at 11.00 at the Ciutat Esportiva. The session will be held behind closed doors and there won’t be a press conference prior to the session.

The FC Barcelona midfielder Andrés Iniesta was one of the standout players this afternoon in the match against Real Madrid. After the match, Iniesta praised the goal scorers Neymar Jr and Alexis Sánchez: “The talent players like Neymar and Alexis have is indisputable. They are players that will help Barça win titles, which is what we all want.”

Iniesta then said that Barça managed to neutralise Madrid’s attacking power: “We knew that Madrid are very dangerous when they’re given space, and we managed to minimise that aspect of their play, especially in the first half. In the second half we struggled a bit more.” The Spaniard then reiterated his desire to renew his contract with FC Barcelona: “I’m very happy here, and I want to stay. I’ll renew my contract soon.”

Here are the statements made by the Barça players after the match:

“I’m pleased with my goal and I’m pleased for the team, we won three important points.”

“It’s hard to have the fans’ confidence but I’m doing everything I can to  win them over.”

“Alexis’ goal was a golazo, I don’t have words, it surprised us all.”

“Scoring a goal in a Clásico is very special, it’s a match that everyone wants to play. It was beautiful, it was like a dream.”

“We witnessed a great match and the best team won.”

“We played better than Madrid. We weren’t brilliant but we saw a good Barça and they also played well. We can improve.”

“Emotionally this is a great victory, but it’s only three points we have to keep on winning.”

“The more points we have over Madrid the better.”