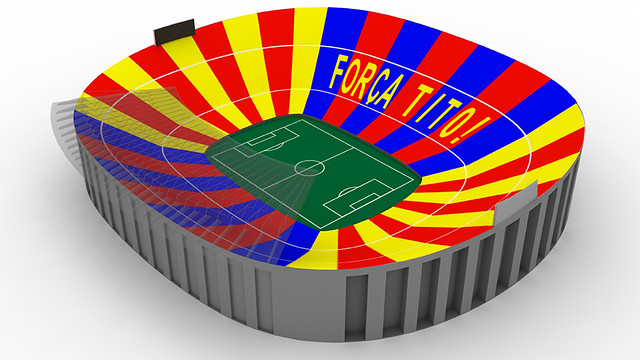 The mosaic, which will be made up of over 98,000 pieces, will feature the Blaugrana and senyera colours and have a message of support for Barça’s former manager

Once FC Barcelona and Real Madrid jump out onto the pitch on Saturday afternoon, at 18.00, the fans in the Camp Nou send a message of encouragement to the former FC Barcelona manager Tito Vilanova with a mosaic that will read ‘Força Tito.’

The mosaic, which will be made up of 98,000 individual pieces, will combine the Blaugrana colours with the colours of the senyara. Vilanova was Barça’s manager in the last league Clásico at the Camp Nou, the day the fans formed a mosaic that turned the Camp Nou into a massive senyera in the minutes leading up to the match.

The Camp Nou, which has a tradition of using mosaics for the 20 years, will recognise the manger who led his team to a record league win last season, when Barça secured 100 points.