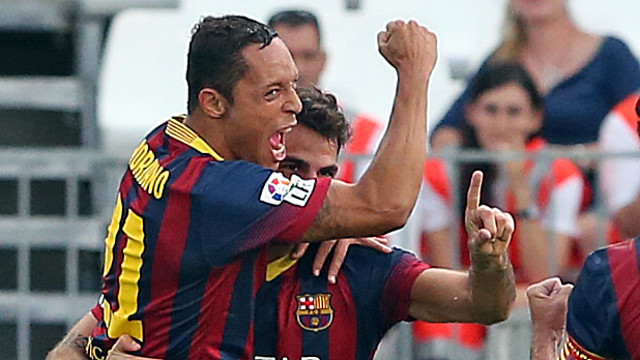 22.00, Canal+Liga and GolT: Barça are chasing their best ever start to a league season against Valladolid

On Saturday night, FC Barcelona could achieve their greatest ever start to a league season. They have already equalled their best ever start with seven wins in seven games, and will go one better with a win over Valladolid at the Camp Nou. The win would also ensure that the Catalans stay top of the table, depending on the result Atlético Madrid’s game against Celta on Sunday at lunchtime. Incredibly, the red-and-whites could match Barça’s perfect start by notching up their eighth win too.

The game is the last one before the second international break of the season, and also coincides with the General Assembly, the annual meeting of FC Barcelona members.

Barça will have to cope without star striker Leo Messi, who was injured against Almeria. But the team can still look amazing without the Argentinian in the line-up. Their terrific midweek performance to win 1-0 in Glasgow on Tuesday night provided more than sufficient evidence of that.

Martino has picked 18 men for the game. Other than Messi, he has also been denied the services of the injured Mascherano, Jordi Alba, Puyol, Cuenca and Afellay. But the good news is that it looks like the FCB captain will be fit enough to make his comeback against Osasuna, the first game after the international break.

If anything, Valladolid have even worse injury troubles. Not only are they missing target man Óscar, but also all of Manucho, Víctor Pérez, Larsson, Álvaro Rubio and Sastre are out too.

After two consecutive draws, the side from Castile are sixteenth in the table but with both Guerra and Osorio finding their goalscoring touch of late, it might not be long before they start climbing the table. But Barça fans will be hoping that that doesn’t happen quite yet, and they can be comforted by the fact that history is very much on their side. Valladolid have only managed to win away to Barça twice in the entire history of La Liga.