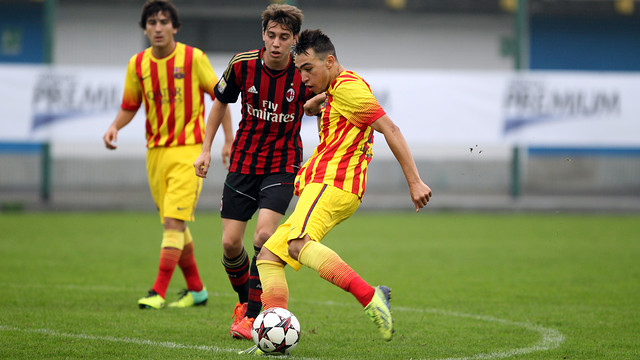 Barça claimed a convincing 2-6 victory at the Ernesto Breda stadium over Milan this afternoon. Munir (2), Sanabria (2), Godswill and Rolón scored for the Blaugrana

Rosell watches the Juvenil A team

President Sandro Rosell watched the FCB Juvenil A team face their AC Milan counterparts at the Ernesto Breda stadium along with the director responsible for Barça’s youth system, Jordi Mestre. Andoni Zubizarreta and Pere Gratacós were also in attendance.

The FC Barcelona Juvenil A team showcased its attacking power at the Ernesto Breda Stadium this afternoon in the 2-6 thumping of AC Milan. The Italians were level on points with the Catalans atop Group H coming into this afternoon’s match, now Barça are leaders on nine points.

It wasn’t an easy match for the Blaugrana as they found themselves a goal down after the opening 15 minutes. But it only took Barça two minutes to comeback from Barisic’s opening goal. Munir (min 20) and Sanabria (min 22) fired the ball into the back of the net to give Barça the lead.

In the final minute of the first half Godswill finished off a fantastic counterattack led by Sanabria to make it 1-3 right before the break.

Milan were not down and out as they came within one goal of the Blaugrana a minute into the second half. The Juvenil A team regrouped and laid siege to Milan’s goal. This is when Barça played its best football and they managed to reestablish a two-goal lead thanks to Sanabria’s strike after a great play on the left from Munir and Quintillà. Five minutes later, the Moroccan-born player scored his second goal of the afternoon thanks to a good assist from Enguene. In the dying minutes of the match, Maxi Rolón made it 2-6 with a fantastic shot from just outside the area.

The three points won this afternoon see the Blaugrana clear at the top the Group H of the UEFA Youth League.