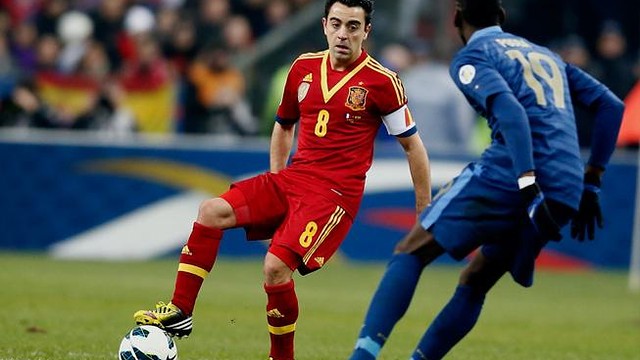 The six FC Barcelona players on international duty for Spain are currently preparing for the match against Denmark in Helsinki. Xavi, when asked about who Vicente del Bosque will select to play in goal, said: “Víctor Valdés has patiently waited for his chance to come to the national team, but I’m not sure if he’ll play. But I’m sure that he’ll react well [if he does]. I’m not surprised by Víctor’s behaviour. I’m not objective when I talk about him because I’m friends with outside of football but he’s an example on the pitch and he’s an exemplary team-mate.”

The Catalan went on to say that both the Spain keepers are “motivated when they train and they’re happy to be here. The boss decides who gets to play. Whoever he chooses, we’ll have a good goalkeeper on the pitch.”

In addition to praising Víctor Valdés, Xavi went on to talk about Cesc Fàbregas. The Catalan explained that “Cesc is a different type of midfielder we usually see at Barça. He always adapts, he can score and he’s good for the team. He’s an extraordinary and very versatile player who can play in the midfield or as a forward, he’s capable of giving assists, come in for the follow-up play and get in the area and score.”