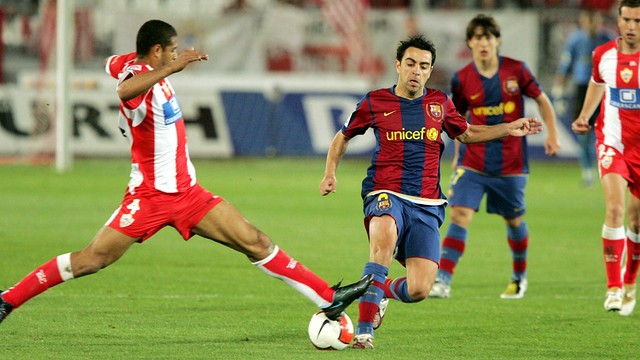 The Andalusians are still looking for their first win this season, while Barça are looking to make it a record breaking seven out of seven

–Almeria are back in the top flight after two years in the second division.

– Their 35-year-old manager Francisco Rodríguez Vílchez is the youngest in the first division. He was formerly manager of the reserve team, and as a player was Almeria’s highest goalscorer of all time.

– Francisco faced Barça in the 2004/05 season while playing for Albacete.

– That means he was involved in the same game as the one in which Leo Messi scored his first league goal.

– The red-and-whites have never beaten Barça in the league, neither home nor away.

– Barça are one win away from their best ever start to a league season. They have never before won all of their opening seven matches.

– Barça is the top scoring side in Europe this season, with an average of 3.6 goals a game.

– Almeria, meanwhile, are one of just two teams that have yet to register a single win in the league this term. The other is Elche.

– They have eight goals in their account, and their top scorer is a former Barça man, Rodri, with 4.

– Nine of the Almeria squad have played against Barça before, but only veterans Soriano and Esteban have ever been on the winning side.

– Fernando Soriano beat Barça with Zaragoza in the 2003/04 season, and Esteban enjoyed the experience no fewer than three times between 1997 and 2000, when he was at Oviedo.

– Corona is the player who has the most experience of playing Barça. His teams have drawn with FCB twice, but on all the other nine occasions they finished empty handed.