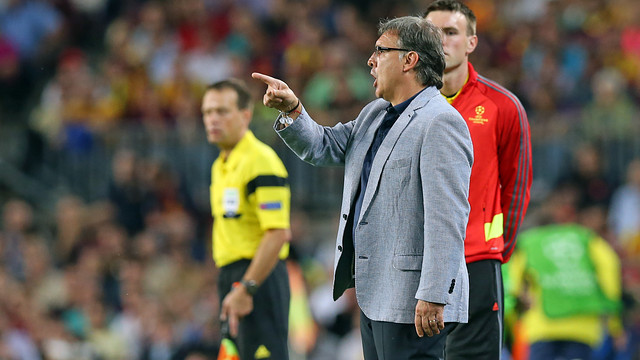 The manager highlights his team’s reaction in the second half when his men “controlled, pressured and defended well”

“It wasn’t too long ago when Barça reached footballing excellence and therefor the fans are more demanding,” he says

The other match of Group H in the Champions League saw Celtic FC fall to Milan by 2 to 0.

[[DES_1]]Tata Martino made his debut in the Champions League this evening in spectacular fashion as his men thrashed Ajax by 4 to 0. Despite the decisive victory the manager noted after the match that “it wasn’t a brilliant match but we put in a strong performance.” He added: “Our second half was better than our first. We controlled the game better, we pressured and we defended well.” This is why the Argentine went on to say that “if we had played the second half like we did the first we would have taken a step back but we corrected our errors and I believe that we took a step forward. We had a noticeable change. I think our victory is just especially because of what we did in the second half.”[[CITA_1]]

The manager accepts that some of the Barça fans have doubts about the team’s play, a concern he addressed with the following statement: “FC Barcelona recently reached footballing excellence and therefore the fans are more demanding. I understand that they didn’t like the first half, that they weren’t satisfied. But they should be fairly satisfied with the second half.” Martino, however, said that the team’s objective is to “reach the same place Barça always reach. We don’t want to change the team’s style of play, but I saw Márquez make long passes too five years ago. It doesn’t mean we’re changing the style if we add alternatives to our play.”[[CITA_2]]

Valdés, due to his brilliant performance in tonight’s match, and Messi, who scored a hat trick, were the standout players of the night. “The team is full of superb players. We’re riddled with stars and it’s normal for a player to put in an excellent performance. I need a solid team so that the individuals can develop their full potential.” He concluded his conference by noting that Andrés Iniesta “is getting back to full form.”

FC Barcelona recently reached footballing excellence and therefore the fans are more demanding
We’re riddled with stars and it’s normal for a player to put in an excellent performance. I need a solid team so that the individuals can develop their full potential
We use cookies to ensure that we give you the best experience on our website. If you continue to use this site we will assume that you are happy with it.Ok