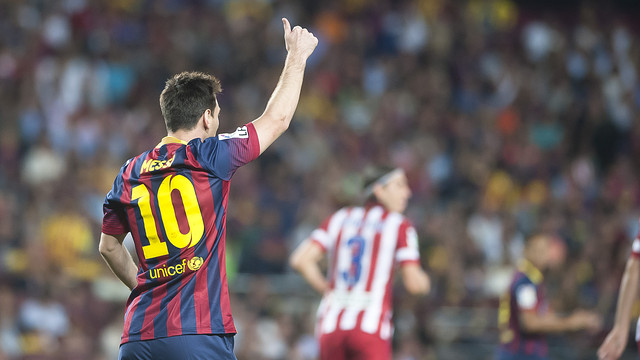 Xavi and Alexis have been rested for Sunday’s match (9 pm, Canal+1 and Canal + HD)

It may only be the third game of the league campaign but the objective remains the same as ever – take the three points and keep up the pressure at the top of the table.  For Barça, it’s the second away match on the bounce and their recent record in the Mestalla suggests that they face a tough challenge on Sunday against Valencia.  They have a relatively meagre haul of four wins there in the past ten years, the last one coming three seasons ago, with a single Messi strike making the difference between the two sides.  Barça need to win – and to win in the best Barça style.

Thumbs up for Messi and Adriano

Leo Messi has returned to full training after spending last Friday in the care of the Club’s physios, and will be available to manager Tata Martino.  The squad has also been boosted by the return of Adriano Correia but Alexis Sánchez and Xavi Hernández, both of whom have featured heavily in recent matches, are rested.  Martino will trim the squad to 18 players before kick-off.

Many of Barça’s recent visits to Valencia have ended in a stalemate and Barça have avoided defeat there since the 2006/07 season, when the team coached by Frank Rijkaard lost 2-1.  On the flip side, the last time Barça came away with all three points was in the 2010/11 season, a single Messi goal separating the two sides.  And with just a single victory in the last five visits, it’s time for Barça to get back to winning ways in the Mestalla.