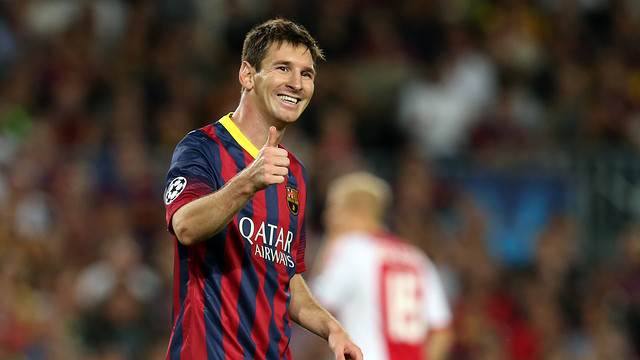 He surpasses Mario Gómez and Filipo Inzaghi, both of whom scored three hat tricks in the competition

The Argentine has scored a total of 62 goals in the Champions League and he’s closing in on Raúl’s all-time record, which stands at 71 goals

With his three goals against Ajax, Leo Messi become the first player to ever score four hat tricks in the history of the Champions League. Barça’s No10 surpasses Mario Gomez, who scored three hat tricks with Bayern Munich and Filipo Inzaghi, who scored three during his time at Milan and Juventus.

This is the fourth time that Messi has trotted off to the Barça dressing room after a Champions League game with the match ball under his arm, a custom afforded to hat trick scorers as a symbolic award for netting three goals.

The Argentine player, who played the entire 90 minutes against Ajax, had six goalscoring chances, of those four attempts were on goal. He was fouled twice and ran a total of 8,647 meters, according to UEFA.
[[CITA_1]]
Closing in on Raúl

In addition to setting another record this evening, Messi reached 62 goals in the Champions League since his debut on December 7 of 2004 in Donetsk. He’s the second highest scorer of the competition, just behind Raúl González (71).

After the match, Messi highlighted the importance of “starting off on the right foot” in the group stage of the European competition. He also said that Barça’s first half wasn’t excellent, but “as the minutes passed we adapted well to what we had to do.”