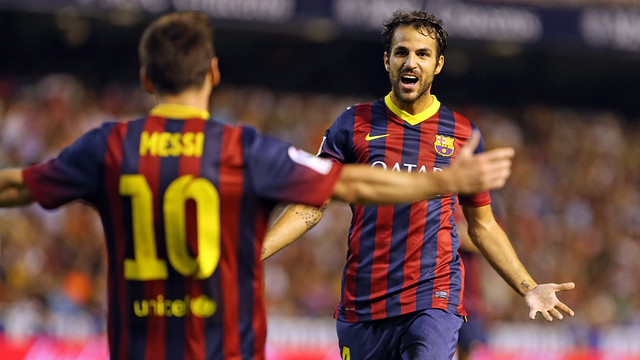 Barça made it three wins on the run to ensure the maximum nine points at the start of the season with a hard fought win in Valencia. Messi’s first half  hat trick, together with another match saving performance form Valdes and the team’s defensive stability in the second half  were key to the win. Messi had set up the game with three first half goals, before Valencia pulled two back just before the break and then put the pressure on Barça in the second half, as Martino’s side were forced to show their defensive skills.

Barça made a sparkling start to the game with Neymar very active and Fabregas looking for spaces, whilst Iniesta orchestrated matters from the middle. With pace and skilful first touch football, Barça were soon one up, after Busquets robbed possession for Fàbregas to set up Messi for his first of the night.

That was on the tenth minute and for the next half hour Valencia were just swept aside as Barça tripled their lead. First, Sergio, Cesc and Leo combined again on 38 minutes and then two minutes later Neymar set up Messi with a perfect header for the Argentinean to claim his first hat trick of the league season.

Postiga brings host back into it

Just when it looked as if Barça would be going in with a comfortable three goal lead at the break, Valencia hit back with two goals in first half injury time. Postiga made it 1-3 with an acrobatic volley and then stunned Martino’s men with another goal seconds later with a near post header from a corner. 2-3 at half time in the end and Messi’s hat trick suddenly didn’t look as certain as it had to give Barça the win.

Barça couldn’t reproduce the control they had shown before the break and the game became looser – though without too many clear chances until Pedro had a great chance after Iniesta put him through on 63 minutes, only to see his effort slide inches wide.

Djukic’s side were desperately looking for the equaliser, but it was Barça who had the best opportunities, with Messi having two one on ones with Diego Alves and Alba and Messi again coming close in the final minutes. In the end, Valdes stood firm whenever Valencia could find a chance and Barça go into the international break with three wins out of three.