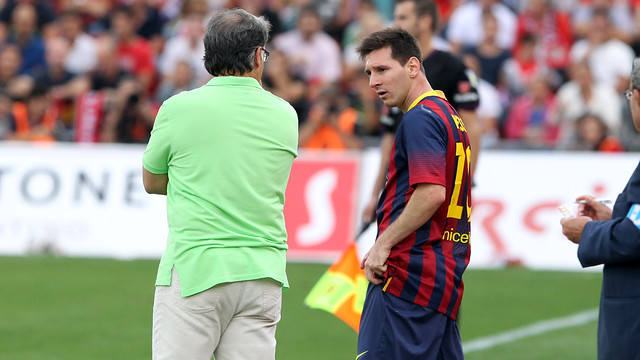 The manager explains that there was “imprecision” in the first half and that he men improved in the second, just like in the matches against Ajax and Rayo

On Messi’s injury, he says that it may have happened “when he scored his goal”

The games against Ajax or Rayo Vallecano are similar to the game played this Saturday against Almería (0-2), where FC Barcelona secured its best ever start to a league campaign in Club history. After the match, Tata Martino said, “we didn’t control the match in the first half like we should have. In the second half we had complete control. It was similar to what we’ve seen in previous matches.”

The FC Barcelona manager went on to say that in the first half his men were “imprecise in their passing” and in the second half they improved. “What we’re looking for is to have more consistency and control our games for 90 minutes. Against Almería we played a very good half and another where our play was subpar,” he added.

The Argentine then went on to heap praise on Barça’s rival: “I really liked Almería in the first half. In the closing 20 or 25 minutes of the first half, after Messi’s goal, they forced us back. They hurt us especially through Suso, who is a very complete footballer, and with long balls from Soriano, who received possession and would then make his pass. Perhaps their intensity in the first half somehow affected their performance in the second half.”

When asked about the injury to Messi, Martino explained: “Apparently Messi picked up small muscle strain in the backside of his right leg when he scored. It’s hard to say anything else until he undergoes additional tests.” The Club’s Medical Services will determine the severity of the injury on Sunday.