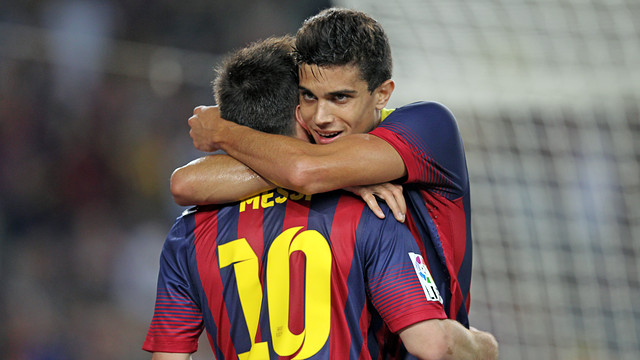 Barça’s next rival in the Champions LEague, Celtic Glasgow, also played this Tuesday. The Cup match against Morton ended in a goalless draw.

Marc Bartra was one of the goal scorers this evening after he seized on Messi’s cross in the second half of the match against Real Sociedad. That was the defender’s second goal for Barça, his first was in May of 2011 against Málaga. “I needed a goal like that because it gives you confidence. It will help me to not let up and to keep on going.” The player explained why he decided to go up the pitch during the build-up of the play that led to his goal. “I was already on a run with the play started. When I saw Messi my intuition told me to go forward.” He added: “I need to know when to attack. I’d like to go forward more often by my job is to defend.”

The center back recognised that “the match against Real Sociedad was very important because it’s not easy to do what the manager asks of us. I believe the fans saw a more complete team than in other years because we can be more vertical.”

Mascherano’s injury could lead to more playing time for Bartra in the team’s upcoming matches. The Catalan, however, lamented the fact that he was called on to replace an injured team-mate: “The most important thing is to keep on training hard. We cannot let our guard down, we have to be consistent and we must move forward.”

“The manager wants us to keep our style of play because it’s basically taken us to the top. What Martino wants is to have alternatives in difficult matches.”

“It was a great match, we worked hard, especially in the first half. We created chances and we scored.”

“I knew of Neymar’s abilities and that he’d fit in at Barça. I’m not surprised.”

“It’s true that it was nice goal, from outside the area with my bad foot. I’m pleased that the goal helped the team win.”

“It was a perfect match against a very difficult rival, they had a phenomenal season last year and now they’re in the Champions League.”

“I played a pretty complete match and so did the team. We’re happy to still be the league leaders.”

“I’m happy because I scored my first league goal even though it wasn’t my best, the ball was ‘crying’ on its way in. But I’m more happy that we won.”

“The team is playing well and we’re getting better each day.”

“I’m thankful to the fans, but also to the manager and the players for having confidence in me.”

“I love to give assists, but what I like the most is to help the team.”