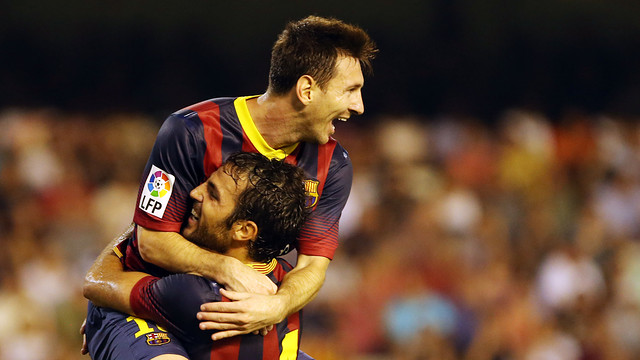 With his hat trick against Valencia – that took him to five goals for the season so far – Messi became only the third player in the Club’s history to bag three goals before half time,

The goals took him level with Hugo Sanchez on 99 as the player who’s scored most away goals in the league’s history.

Every time Messi runs out there’s a chance he’ll break a record. Records are there to be broken and Messi’s hat trick this Sunday was yet another demonstration that the 26-year-old is a born record breaker who is well on his way to becoming one of the game’s all time greats.

Messi’s hat trick was the third by a Barça player in the first half of a league game, after  Hristo Stòixkov in 1991 and Romário in1993 and was the 23rd of his career.

Messi also equalled Hugo Sanchez’s record of 99 goals in away matches in the league  – a record that seems certain to be broken by the Barça number 10.

The hat trick was the second ever scored in a half against Valencia t La Mestalla and also took Messi above Quini as the league’s sixth highest scorer with 220 – 31 behind the all time leading scorer Telmo Zarra with 251.