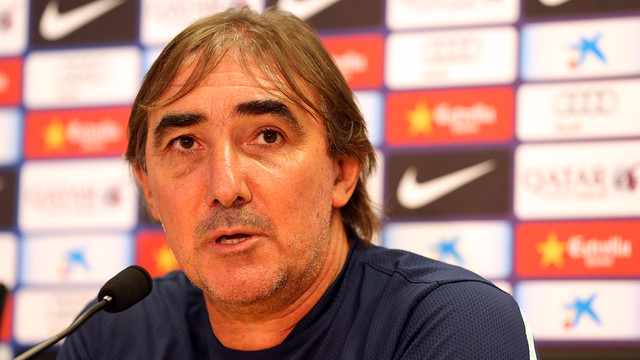 Tata Martino made it clear that he is not here to change FC Barcelona’s way of playing, and his assistant Jorge Pautasso reiterated the point by saying “we’ll never take the style away, we have come here to add to, not take away from, what Barça has done so well in recent years. If things go bad for a while and we drop back and regroup, that doesn’t mean we’re playing on the counter attack”.

He was speaking to the press in the place of Martino, who has returned to Argentina following the death of his father. He added that “our idea is to play the same way as the last few seasons, and start pressurising up front like the team used to”.

The Ajax match now played and analysed, attention switches to Saturday’s clash at Vallecas. “We know it’ll be a hard game because Rayo is a team that attacks and takes risks. It’ll be a wide open match but we hope to make the difference”, said Pautasso.

He only gave away a few clues about the team selection for tomorrow, saying that it’s in the middle of defence where they have the most problems, with Piqué’s presence in doubt. “The doctors have treated him and he’s improved, but we’ll wait until training to decide” he explained.

If Piqué doesn’t travel, Pautasso has said that Bartra is the most likely candidate to line up alongside Mascherano because “he’s the most logical alternative”.

Pautasso ended by confirming that Tata Martino will be back on time to sit on the bench at Vallecas: “He’s left Argentina on a flight to Madrid. God willing, when we arrive, he’ll be there waiting for us” he said.

If things go bad for a while and we drop back and regroup, that doesn’t mean we’re playing on the counter attack
Marc Bartra is the most logical alternative at centre back if Piqué isn’t fit
We use cookies to ensure that we give you the best experience on our website. If you continue to use this site we will assume that you are happy with it.Ok