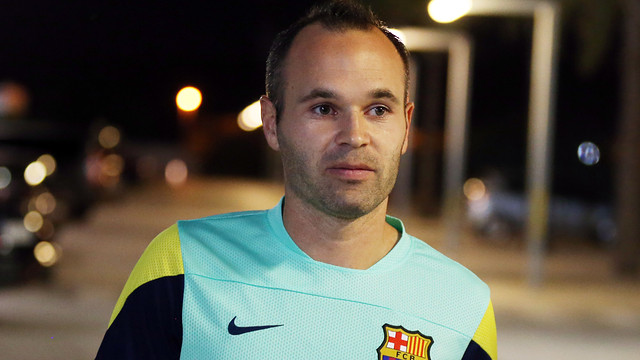 Andrés Iniesta has told a press conference about the negotiations for his new contract and reckons things are all going to plan. “I have said many times that my aim is to retire here and the club wants the same” he said. “We all want to reach an agreement.” The 29-year-old added that “there is no place like this.”[[CITA_1]]

However, the player who has been at FCB since he was 12 did explain that “the news coming out and the things people and reporters say are not things I can control. But there is nothing strange or any war going on between Barça and Iniesta. The club wants me here and I want to stay here.”[[CITA_2]]

He continued by saying that “it has nothing to do with money or whether I am the second, third, fourth or fifth best paid player. What motivates me is knowing that I have some good years ahead in which I can keep improving and growing as a player”.

Iniesta also spoke about Saturday’s game with Almeria, where Barça could complete their best ever start to a season. “We want the three points, not the record” he insisted. “We need to keep winning and keep improving … But away matches are always that bit harder”.[[CITA_3]]

As for his personal form, he is pleased with the season so far and perfectly understands why Gerardo Martino has introduced a rotation policy. “The most important thing is that we are all getting to play a role and feel useful” he said. “Nobody likes being dropped, but it happens to us all. You have to take things as they come. The manager has to make his decisions, and the first thing on his mind is the good of the team.”

There is no war between Barça and Iniesta. The club wants me here and I want to stay herer aquí
What motivates me is having some good years ahead in which I can keep improving and growing
Nobody likes being dropped, but it happens to us all. You have to take things as they come