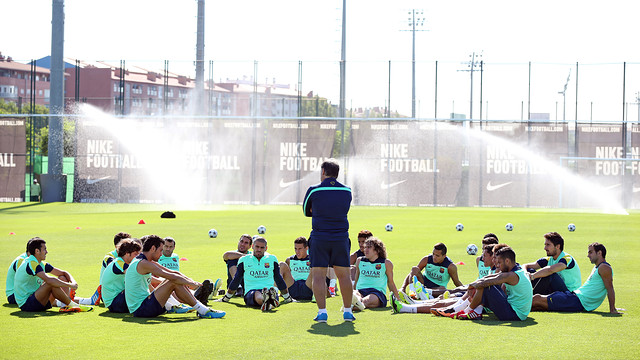 Carles Puyol took some part in the session, whilst Jordi Alba missed out after the injury he picked up on Saturday night.

The first team squad continued preparations for Wednesday night’s Champions League opener against Ajax at the Camp Nou, with a training session at the Ciutat Esportiva this morning. Tata Martino worked with all 21 players available, plus captain Carles Puyol, who joined in part of the session. Puyol explained on Friday that he is nearing full fitness and should soon be available to play.

One player who was missing was Jordi Alba, who will be out for three weeks following the injury he picked up against Seville on Saturday night.

The players will train again at the Ciutat Esportiva on Tuesday morning in a session which will be open to the media for the first quarter of an hour. Tata Martino and Gerard Piqué will then hold a press conference.

Ajax will train at the Camp Nou at seven on Tuesday evening, with coach Frank de Boer and one of his players due to face the media half an hour before at the Ricard Maxenchs Press Room at the Stadium.