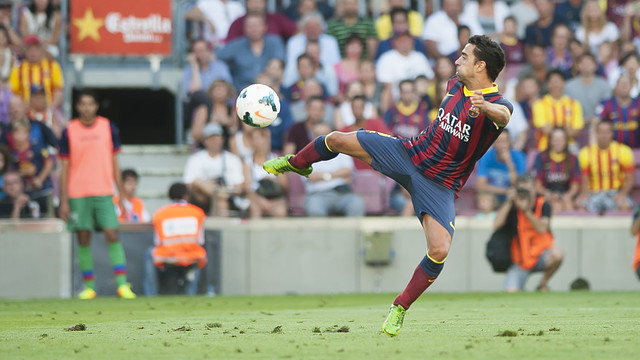 Xavi Hernández, who celebrated his 15-year anniversary from when he first played for Barça’s senior side, is pleased with the team’s first official match of the season

“I’m very happy with the way we’ve started,” said Xavi Hernández after the match against Levante. The midfielder highlighted the newly appointed manager’s work in the built-up to the start of the season and he admitted that “we’ve recovered the mechanism we had lost.”

Xavi went on to say that “we’ve recovered our high pressure, just like Tata Martino wanted. We’ve regained this aspect of our play and that’s what we were looking for, we trained hard throughout the whole preseason.”

A veteran on the team

Xavi, the team’s second captain, explained how the new manager and Neymar are adapting to the team: “Tata is a hard-working manager, he’s close to his players and he observant. He’s very respectful, he has a winning mentality and I think it’s going to go very well.”

When asked about Neymar, the vice-captain only had good words to say: “Neymar is a good lad, he’s humble, he’s here to help and he’s capable of making a difference. His one-on-one ability can really help us.”

“The boss doesn’t want the midfielders to drop and build the play up from the back, that’s what the full backs do. He wants us to be in the influential zone of the pitch, he wants us to give the assists and to be closer to the area,” explained Xavi.

After the match, Neymar, Alexis and Alves talked to the press. Here are their statements:

“We wanted to play a good game for the fans who came to the stadium.”

“These kind of games give me confidence, and today’s was very important for me and for the team.”

“We have a lot of important matches coming up and we need the best version of Messi and the best Barça.”

“I felt great during the match. We started off well, with a win, and that’s the most important thing.”

“We saw come excellent plays and great goals in the first half.”

“The fans are happy that we started this way, I’m sure. This is what we want.”

“It will be a great match against Atlético Madrid, they are a great team. We hope to play a good game.”

“We’re off to a good start, I hope to continue improving, but this start isn’t bad at all.”

“We pressured our rival, we made them see that they didn’t have any options. I think this needs to be constant throughout the season.”

“We’ve regained the mechanisms that we lost, the thing that made us different.”