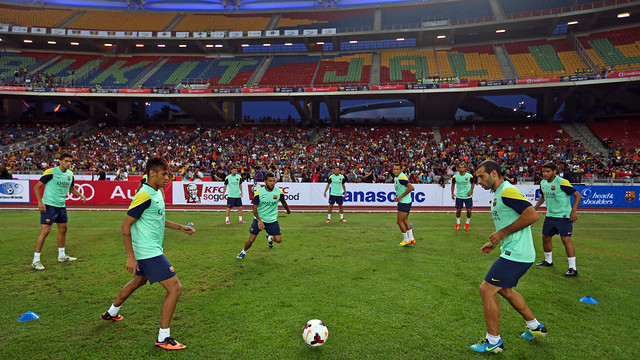 More than 10,000 fans watched the team prepare for tomorrow’s match

José Manuel Pinto picked up a knock to his right knee during this evening’s training session. The player’s condition will be reviewed tomorrow morning to determine if he can play against the Malaysia XI team.

Tata Marino’s Barça trained this Friday evening at Bukit Jalil National Stadium, the venue that will host tomorrow’s match against an all-star selection of Malaysian players. Jordi Alba, who didn’t train on Thursday, trained alongside his team-mates this evening.

The man of the hour, however, was Cristian Tello, who learned that he was named to the Spain squad by Vicente del Bosque for the upcoming international friendly against Ecuador. The players and the manager congratulated Tello just before this evening’s session.

Pedro Rodríguez, who is recovering from a knock to his right calf muscle, was the only player to miss the session. Dos Santos and Tello, both of whom have been recovering from injury, trained with the group.

Multitudes in the stands

More than 10,000 spectators, many of whom purchased tickets to watch the session, looked on as the Blaugrana prepared for tomorrow’s match. Leo Messi was once again the most acclaimed player of the squad.