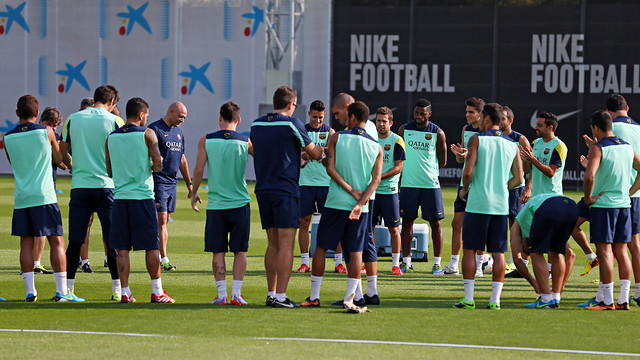 Gerardo Martino has named a 19-man squad for Sunday’s match away to Valencia (9 pm, Canal +) and has left out Xavi, Alexis and Oier

The Barça players go down to Valencia this Sunday for the third round of the league campaign against a side that has traditionally proved to be a tough nut to crack (9 pm, Canal +). Gerardo Martino has announced a squad of 19 players for the match and has decided not to take Xavi, Alexis and Oier.  However, Messi and Adriano have been declared fit by Club doctors and have made the cut for Sunday’s clash.

Martino was in charge of the final training session before the players travel down to Valencia on Sunday.  Youth player Xavi Quintillà trained alongside the seniors.  Leo Messi and Adriano were the main talking points of this Saturday’s session in the Ciutat Esportiva Joan Gamper.  The Argentine rejoined the main group of players in training after having physio treatment on Friday while Adriano also completed today’s session satisfactorily.