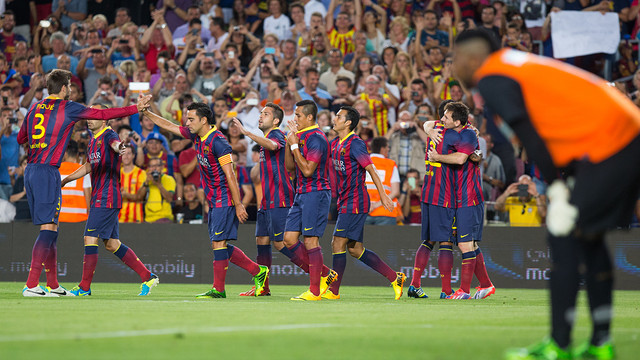 FC Barcelona will face off against Thailand in the first of two matches scheduled for the 2013 Asia Tour (14.00, TV3, GolT)

Five days after the Joan Gamper Trophy, FC Barcelona will play its fifth match of the 2013/14 preseason. After the 8-0 victory over Santos the first team have had a very intense schedule, including trips to Israel, Palestine and Thailand, and promotional, institutional and commercial events. Now, however, it’s time for the ball to take centre stage.

FC Barcelona will face off this Wednesday (14.00, TV3, GolT) against Thailand at Rajamangala National Stadium. Tata Martino will be able to call on all 24 players who made the trip to Bangkok, including Tello, who trained alongside his team-mates on Tuesday.

The match in Thailand is the first of two games that Barça will play in Asia. After this afternoon’s match, Barça will travel to Kuala Lumpur, where the Blaugrana will feature in their last match of the preseason before the official beginning of the season, which is scheduled for Sunday the 18th against Levante.