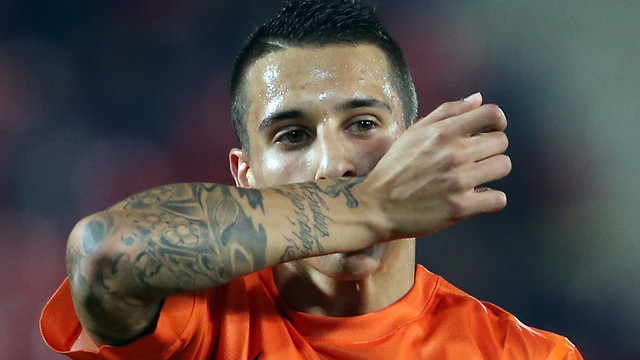 After signing a new contract last December, the La Masia graduate will begin his second season with the first team

Cristian Tello has signed a contract extension that will keep him at the Club until June 30 2018 and contains a buyout clause of 25 million Euros . The Catalan winger played 34 games last season, scoring 8 goals after signing his first contract as a first team players last December.

Tello joined Barça as an 11-year-old and then played for  Damm and Espanyol before returning to the Club in 2010 to play with the B team. The following season – 2011/12 –he broke into the first team and under Tito Vilanova he became a full member of the first team squad.

The speedy winger made his debut with the first team on November 8 2011, when he was 21, playing in the Spanish Cup game against Hospitalet and scoring twice.. He then made his league debut on January 28 2012 against Villarreal at the Madrigal. Under Pep Guardiola he scored his first league goal against Real Sociedad on February 4 2012. Last season, as a fully fledged member of the squad, he proved himself a vital alternative in the Barça attack. His speed and strength promise to supply Tata Martino with another option up front.