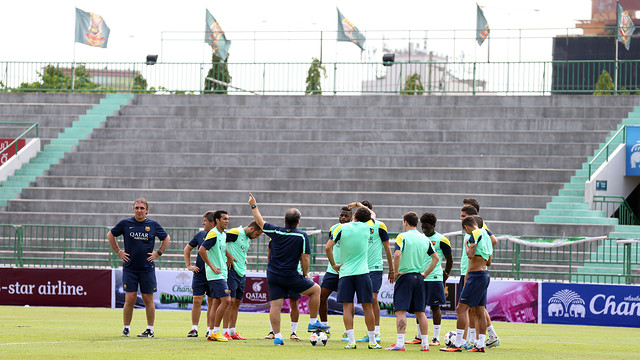 Tello rejoined the group and Dos Santos has started exercising on the pitch again, but in isolation from the others

After a busy first day of the Asian Tour, the Barça squad trained in Bangkok in the first of two sessions on Tuesday. All 24 of the players on the tour trained normally apart from Jonathan Dos Santos, who worked out in isolation as he battles to recover from the pulled quadriceps muscle that kept him out of the Joan Gamper Trophy match last Friday. The venue was the Thai Army Stadium, and the weather was as hot and humid as it tends to be in this region.

Cristian Tello, meanwhile, has rejoined the rest of the team after also missing the Gamper with a muscle injury. On Monday he had only participated in part of the regular first team session, but this time he worked out at the same rate as all the other squad members.

It was a physical session in which the focus was on preparations for Wednesday’s game against the Thai national side. Barça train again this evening at 19.00 in what will be tomorrow’s match venue, the Rajamangala National Stadium.