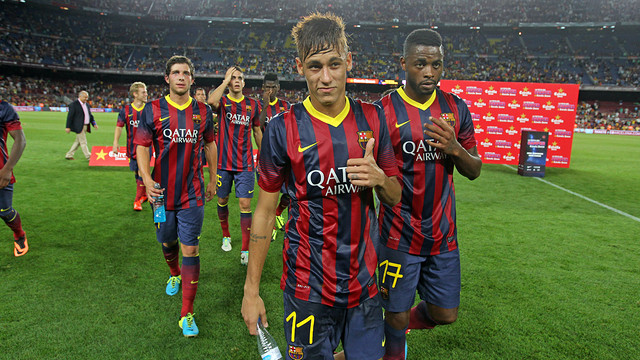 The Brazilian made his debut at the Camp Nou in the second half of the Joan Gamper Trophy, which ended in a 8-0 victory for Barça over Santos

Despite playing a full half, the new FC Barcelona player was unable to score, “I hope to score soon,” said the forward

Neymar da Silva Santos Junor made his debut at the Camp Nou as an FC Barcelona player this Friday night. The Brazilian’s ex-teammates were unable to stop the Blaugrana when they went forward, conceding eight unanswered goals. “Playing with Barça at the Camp Nou was a marvellous experience,” said Neymar.

When asked what it was like to face his former team, Neymar confessed: “it was a bit strange, but now I defend Barça’s colours.” The Brazilian played the entirety of the second half, and near the end of the match he had a couple of chances to score but was unlucky with his attempts. “I wasn’t able to score, but I hope to do so soon,” he said. “It’s a luxury to play alongside great players like Xavi, Messi or Iniesta.”

The Catalan midfielder was asked to give his first impressions of Neymar: “he’s humble, despite what many may think, and he’s adapting well to the group.”

Sergi Roberto, who was promoted to the senior side this summer, played a fantastic match against Santos. “I’m learning a lot each day as I train with my teammates,” he said after the match. “It’s very complicated to play for Barça because we have the best players in the world.” He added: “I have to take advantage of the opportunities I’m given, I have to show the boss that I can earn playing time with this team … Being a first team player is a dream come true.”

“We were very intense and we scored a lot of goals.”

“Today’s result is proof that we take care of ourselves when we’re on holiday.”

“With this spirit we will be able to once again do great things.”

“Tata Martino is a good manager, he’s given us that intensity that we perhaps lost over the years.”

“The fans can get excited about this team because the players are ready to give it their all.”

“We imposed a very fast pace from the very beginning, we scored early and that slowed Santos down.”

“If we’re at our level and if we impose our style of play, our rivals are going to have a very tough time.”