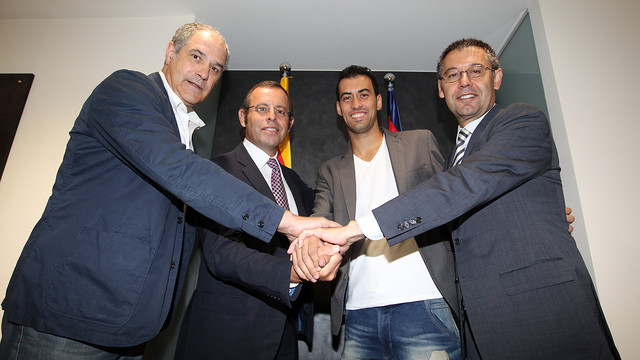 Today at 13.30, the player signed a new contract that ties him to the club until the end of the 2017/18 season with the option to one more

Sergio Busquets will be staying at FC Barcelona until June 30, 2018, with the option to one season more. At 13.30 today in the club offices, the player was joined by president Sandro Rosell, vice-president Josep Maria Bartomeu, director of football Andoni Zubizarreta, the player’s father and former FCB goalkeeper Carles Busquets and his agent Josep Maria Orobitg. Busquets’ buyout clause remains at 150 million euros.

25-year-old Sergio Busquets has made 238 official appearances for the club, and has been a first team regular since the 2008/09 season.