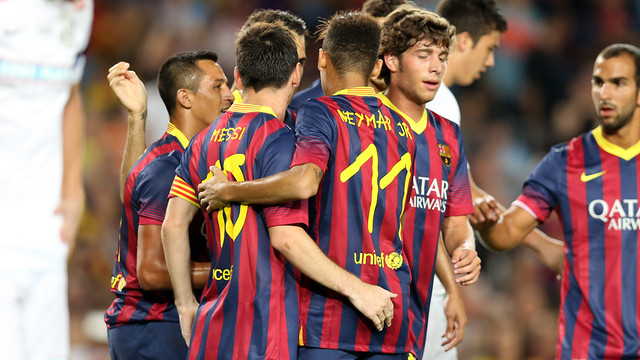 FC Barcelona thrashed Santos by an incredible eight goals to nil in the 48th edition of the Joan Gamper Trophy. The goals came from Messi, Léo (og), Alexis, Pedro, Cesc (2), Adriano and Dongou

It was the Camp Nou’s first chance to see FCB’s new manager and star striker, Tata Martino and Neymar Jr

The 48th edition of the Joan Gamper Trophy is not one that the local fans will be forgetting in a hurry. Or Santos for that matter. FC Barcelona simply played the Brazilians off the park on an extraordinary evening at the Camp Nou. We finally got to see Barça 2013/14 at full strength, including new manager Tata Martino on the bench and Neymar Jr being presented to the fans on a night that the stadium also bade a final farewell to one of the biggest legend’s in club history, the great Antoni Ramallets who died on Tuesday. They were able to dedicate no fewer than eight goals to his memory in the fourth game of the preseason, supplied majestically by Messi, Léo (og), Alexis and Pedro in the first half and Cesc (2), Adriano and Dongou in the second.

Barça clearly wanted to put on a show for their fans right from the start. The game was barely under way before Messi latched onto a loose ball in the middle of the area and sent home the first goal of the night. Just four minutes later and Santos defender Léo made a complete mess of a clearance and put the ball in his own net. Santos hadn’t even managed to cross the half-way line and the Catalans were already two up.

All over after half an hour

The South Americans didn’t manage to trouble Valdés, who was wearing the name of the late Ramallets on his back, in the whole of the first half. It was absolute dominance from the home side, but we also got see some signs of the Tata touch in the way the Barça pressure was applied deep in the opposing half. Santos couldn’t find a way out, and found themselves losing possession to Barça time and again, and that was how the third goal was produced, with Alexis regaining the ball just inside the final third and combining with Messi before slotting home a deft finish.

There was still time for another from FC Barcelona before the break. This time the goal came from a delightful team move involving all of Iniesta, Alexis and Alba, who ended by sending a killer pass through to Pedro, who simply had to tap the ball home. There was only one side on the pitch, and that side was an awe-inspiring FC Barcelona.

Messi and Neymar, 16 minutes together

The result might not have been in doubt, but there was still something else to look forward to: Messi and Neymar playing together for the first time. That happened when the Brazilian came on for Pedro. Tata Martino made six other changes, with only Mascherano, Alexis and Messi staying on for the second half. The Argentinian and Brazilian superstars were on the field together for 16 minutes, during which time Barça extended their lead through Cesc.

Fàbregas would be one of the most active players of the second half. It was also him who scored Barça’s sixth, and it was also the Catalan who laid on the assist for Dongou to score the final goal of the night. In between, Adriano had scored an almost exact replica of his goal against Valencia with a terrific strike from outside the area. It had been a humiliating night for Santos, and if it hadn’t been for the woodwork, they could have suffered an even worse hammering. Cesc hit the post from a free kick, and the woodwork also denied the Camp Nou the opportunity to see its hew hero, Neymar, scoring his first goal for the club. We may still be in the preseason, but the new look Barça is looking very promising indeed!