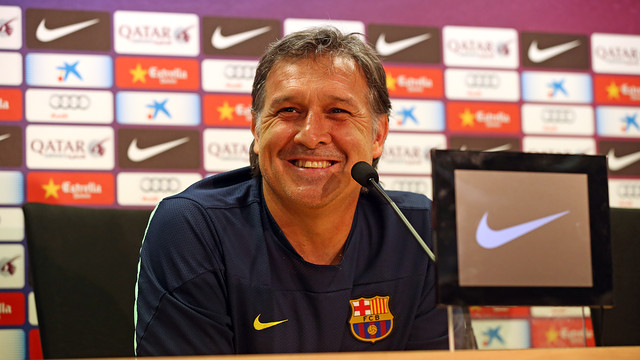 He explained his point of view on the question of central defenders: he’s waiting for Carles Puyol and has faith in the players he’s got

Barça gets the league campaign underway on Sunday in the Camp Nou against Levante, and manager Tata Martino gave a press conference on Saturday morning to explain the state of his team ahead of the match.  “The main concern is to play well and win.  It’s essential in order to build confidence and send out a message.  I want Barça to be good as soon as possible.  We’ll try and do things well right from the first moment.  That’s the starting point”.

The Argentine coach revealed that unlike previous years, the squad list will be announced the day before the match.  That’s what he did today and the good news was the presence of Messi and Fàbregas: “Both Leo and Cesc had niggles but they took a full part in training and won’t have any problem in playing”.

Martino also referred to the possible incorporation of another central defender and stressed: “I’m waiting for Puyol.  He’s working hard on field training and it’s likely that from the September FIFA date he’ll be able to train normally.  I know what the Club’s position was.  What I’m saying is that if ‘Puyi’ is OK, then with Piqué, Bartra, Mascherano and Adriano or Busquets we’re fine.  And if something happens, we have the winter transfer window in three months’ time”.[[CITA_1]]

“The problems there were last year in defence were all due to injury.  If they’re all fit, we have alternatives”.

Ready for the debut

On a personal level, Tata admited: “I’m new to European football, but not as a coach.  Nevertheless, all debuts generate anxiety”.  But he believes he’s settling in well: “I’m still getting to know people.  The Barça world is very big but out on the pitch it’s all easier to deal with.  That’s our place”.[[CITA_2]]

The Barça manager also spoke about Neymar and revealed that he has asked him for “patience and calm”.  “He’s an excellent player, great in the 1 to 1 and looks comfortable in training.  The only thing we need is to be logical when it comes to slotting him into the team, as his arrival wasn’t normal.  He’s probably the one who has done the least physical training”.

I’m waiting for Puyol. He’s working hard on field training and it’s likely that from the September FIFA date he’ll be able to train normally
The only thing we needwith Neymar is to be logical when it comes to slotting him into the team, as his arrival wasn’t normal. He’s probably the one who has done the least physical training”.
We use cookies to ensure that we give you the best experience on our website. If you continue to use this site we will assume that you are happy with it.Ok