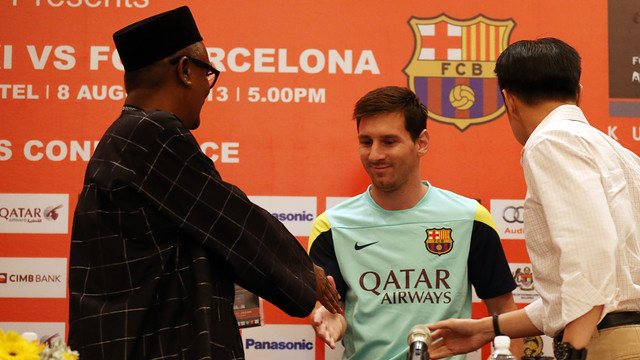 Messi was asked whether the thought of the World Cup at the end of the season might affect his role at Barça, and replied that “there is still a year to go and there are a lot of important things to play for here at FC Barcelona before anyone can think any further beyond. At FC Barcelona the target is the same as it is before any season – to try to win all of the titles that we’re competing for.”

One day after Neymar scored his first goal for Barça in his first start alongside Messi, the Argentinian once again insisted that he and his new team-mate are getting along fine.

“We get on with each other off the pitch and we’re getting to know each other on it” he said. “We haven’t played much together. But he’ll bring a lot of joy to the club, to us and to the people.” On the suggestion that their respective styles are not suited for each other, Messi replied that “these are things that come out of the press or who knows where. There’s no problem between us.”

Having scored five goals already in the preseason, which clearly shows that his injury woes are behind him, Messi humbly said that “I’m starting like I do every year. With the same enthusiasm as ever … After the injury at the end of last season, I had to work a little bit harder than the others, but now I’m fine.”

The biggest change this year is the arrival of a new manager, Tata Martino, who Messi says “is telling us that we need to get back to being who we have been for the last few years … He wants us to create more pressure and work on recovering the ball as quickly as possible.” But it is still too early to draw conclusions: “We haven’t been working with Tata for long. For the time we’ve been together, things are working well, but we’re still getting to know each other. He only arrived very recently.”

Messi concluded his conference by saying that “we are preparing for the matches very seriously, they’re good for getting us into our rhythm. We’re preparing nicely and should be in good shape for the first official matches.”