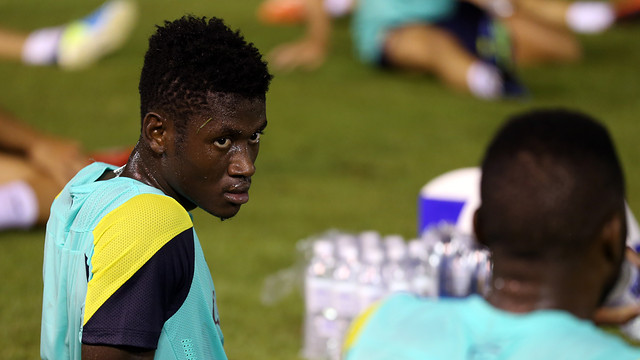 The FC Barcelona youth system is still producing new stars. There were thirteen Barça B players that featured in some way in the six 2013/14 preseason matches. Cameroonians Dongou and Bagnack featured particularly prominently, for not only did they play in Europe, but also went on the Asian Tour.

Thirteen from Barça B in Europe

Against the side now coached by Pep Guardiola, Roura used several B team players to cover for the internationals that has appeared at the Confederations Cup and had not yet returned to duty. In the second half against the European champions, no fewer than ten of the team were reserves.

Cameroonian Dongou was one of the stars of the big win in Oslo, with two goals against Valerenga, while Sergi Gómez was the only B team player to appear in all three of the games, with the third match played in the Gdansk Arena.

For his first game in front of his new supporters, Tata Martino picked two reserve team players, Bagnack and Dongou, who both came on in the second half, with the latter grabbing one of the eight goals.

Dongou and Bagnack were also the only Barça B players to travel to Thailand and Malaysia. The defender started the match in Bangkok, giving away the penalty that led to the Thai’s only goal. Striker Douala joined the action in the second half.

In Kuala Lumpur, Bagnack replaced Mascherano for the last ten minutes, and Dongou substituted Cesc after the latter was injured in the 82nd minute.