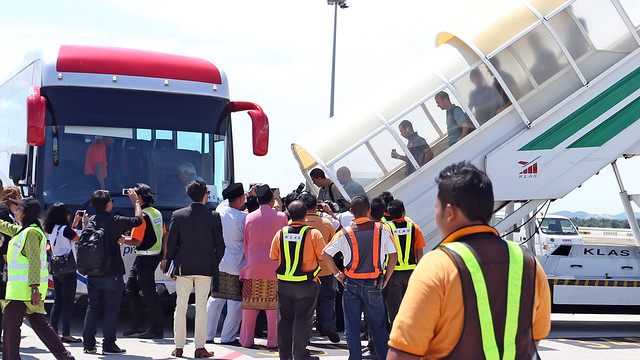 Tata Martino gave the players the morning off, and they are due to meet at the hotel at 14.00

After the Thai princess, this time it was the Malaysian head of state took the opportunity to see Barça

The further the team travels east, the greater the time difference with respect to Barcelona. The first stop, Israel was just an hour ahead. In Thailand it was five, and now in Malaysia it’s up to six. On Sunday they’re flying back to Barcelona, where everything will return to normal.

They arrived in Kuala Lumpur, the city of the Petronas Towers. And that is sure to be where the players will be going on Friday morning to enjoy the half-day off that they have been given by Tata Martino. They were told about this well-earned break on Thursday, following the trip from Thailand to Malaysia on a day when we have found other things. Such as the following:

Tata Martino has given the players the morning off tomorrow. The Friday morning session has been cancelled and the players are not due to report to the One World Hotel until 14.00 for lunch. Many of the players are likely to take the opportunity to do the shopping in the mall close to the hotel. The Kuala Lumpur city centre is half an hour’s drive away.

But some of them are also likely to want to check out the Petronas Towers, which are 452 metres high (not counting the antennas), and which also has a 140,000 metre shopping centre and parking for 5,400 vehicles. The towers, designed by architect César Pelli, are a national symbol, and were the tallest buildings in the world from 1998 to 2004. They have since dropped to seventh place, far short of the Burj Khalifa in Dubai, which reaches 828 metres. In comparison, the Sagrada Familia in Barcelona stretches to a mere 170 metres.

Tata Martino’s decision to cancel the morning session means some changes to other events on the tour schedule, many of which are associated to the club’s sponsors and the match promoter. A number of meetings were held in the team hotel with members of the FC Barcelona executive to make sure that everything still fits in with the new plan.

On Thursday it was revealed that the Malaysian head of state, 85 year old Tuanku Abdul Halim, will be coming to Saturday’s pre-match training session. The 27th Sultan of Kedah will be meeting the players in the morning, although it is still not clear whether he will be attending the match. In Thailand, it was the princess who made a point of coming to see the Barça players in action.

A total of 14 media (7 newspapers, 4 radios and 3 televisions) have been following the tour ever since the players departed from Barcelona. Until today they were also joined by Fox, which is preparing an in-depth documentary about Barça. A team of five has been accompanying the team in Israel, Palestine and Thailand.

Malaysia is a mainly Muslim country, and Barça have arrived the day before the end of Ramadan, which is a holiday. Therefore the traffic in the city centre was a lot less dense than it usually is, meaning the transfer from airport to hotel was much quicker that it would usually be – something for which the players were grateful after the departure of their flight had been delayed for an hour and half.