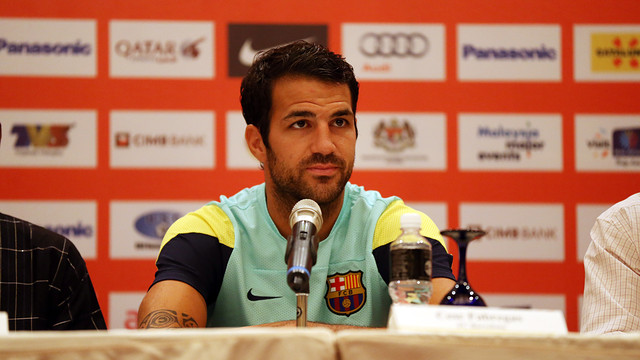 “I never spoke to anyone” he said, while thanking the club for its support. “My conscience is very clear.”

Before the press conference started in Kuala Lumpur and despite the media interest in his future, Cesc preferred to open with a few words about Tito Vilanova. “I have been thinking a lot about him” he said. “We all love him a lot.”

Cesc Fàbregas has made it more than clear that he intends to stay at Barça. “I’ve wanted this since I was a little kid. I left a club that had done a lot for me and my opinion never changed” he said when asked about Manchester United’s interest in singing him.” My dream of being a success at Barça was huge and nobody can change that. I never doubted for a moment. I have always stayed calm about this.”

He was also thankful to FC Barcelona for being so supportive about the issue. “Bartomeu, Zubi, Tito, Tata… They all told me I’d stay. There were never any doubts, either from club or myself. I have always felt wanted. I have messages from the president, from Bartomeu, from Tito… I have spoken face-to-face with Tata. There’s no problem in that regard”.

Although there has been plenty of talk in the media about Manchester United’s interest, Cesc said that he never spoke publicly about his desire to stay at Barça “because there was never anything in my head other than the idea of staying here … I didn’t lie to anyone. I didn’t hide anything. My conscience is clear. I am very happy at FC Barcelona.” He then reiterated the fact that since arriving at Barça in 2011, he has not spoken to any other club.

He concluded by saying that at Barça “the demands are very high … It has to be one of the most demanding clubs in the world. That’s a motivation. You have to get better and get things right because otherwise you come in for criticism and doubts are generated. I am always trying to improve.”