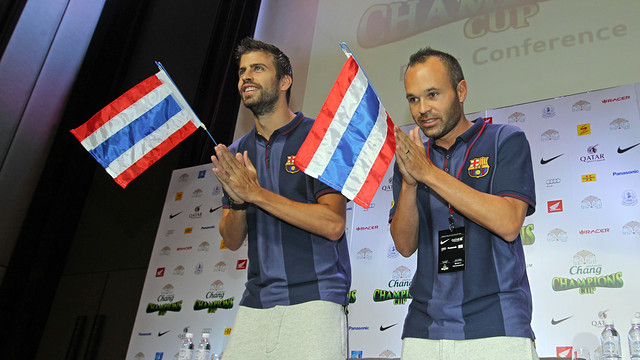 The centre back was speaking at a press conference in Bangkok

Gerard Piqué is convinced that Cesc Fàbregas will stay at FC Barcelona despite the offers that the press is saying are coming from Manchester United. “He will stay at Barça because that’s his dream,” said one of Cesc’s most intimate friends. “He always looks calm about it to me. He’s a very good player. It is because of those qualities that teams are interested in him.”

Andrés Iniesta, who joined Piqué for the traditional pre-match press conference, added that “Cesc has performed to a very high level for us. I am convinced that he’ll be doing that again this season.”

Neymar has much to offer

Another major topic in Bangkok was the arrival of Neymar, who Iniesta reckons “won’t need much time to adapt. When you are one of the best players in the world and you come to a team like ours, you adapt quickly. He’s coming from a different kind of football but anyone can see that he has quality and talent. He’ll do a lot for us. Everything about his signing is positive for us … He’s closer to Dani and Adriano right now, but it’s only natural that he’ll gradually start feeling more at home with the group. We’re a very healthy group in that respect.”

Someone in no need of adaptation is Leo Messi. He’s already playing surprisingly brilliant football considering we are still in the preseason. As Piqué said “he gets better every year, it seems like he’s reached his limit, and then the next season he goes and breaks even more barriers”. And Piqué has no objection to the way so much of the team is structured around his Argentinian his colleague. After all, “he is the best player in the world.”

The centre back had a message of support for Tito Vilanova and then went on to speak about his replacement, Tata Martino. “The training sessions are the same, with the ball featuring a lot” he said. “Tata likes to speak to each player individually and that’s very positive. There haven’t been any radical changes”. On the need to sign another centre back, he added that “Barça needs a special and different kind of player. It is not easy to find players like that on the market.”

Proud of the Peace Tour

As he already did on his Facebook page, Piqué used the conference to express his satisfaction at the Peace Tour of Israel and Palestine: “These trips are very positive” he said. “We are from Catalonia but we are a global club and we have to go everywhere we can to be close to people. I am very proud of this club. If we can do little things to help, I am sure that the people receiving such visits will feel much better.”