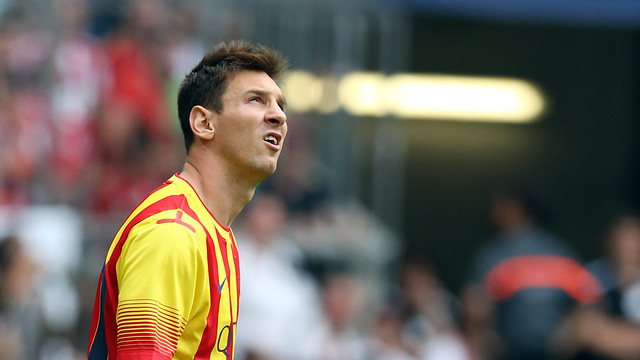 On Saturday evening (19.00, TV3 & GolT) Barça play the second game of their preseason after two days of training in Oslo and with Tata Martino watching from the stands

Like in Munich, just 12 first team menbers are available, who are joined by 11 from the reserves

There will be a minute’s silence before the match in memory of the victims of the Santiago train accident, and the FCB players will wear black armbands

Barça 2013/14 face their second test of the preseason on Saturday night in Oslo against Valerenga. The game kicks off at 19.00 in the Ullevaal Stadion, and is the first match after the official presentation of Gerardo Martino as the new first team manager. The Argentinian is travelling to Norway, but after making initial contact with the players, he is expected to watch the game from the stands. At his Friday press conference, where he was joined by director of sport Josep Maria Bartomeu and director of football Andoni Zubizarreta, Martino spoke about how much he is relishing the opportunity to manage such a magnificent team.

The same 23 players are available for the game with Valerenga as appeared midweek against Bayern Munich. Only 12 of these are from the FCB first team, with the other 11 drafted in from the reserves to boost the numbers at the disposal of Jordi Roura and Rubi, who are overseeing affairs until Martino definitively joins the staff.

Barça opened their preseason schedule with 2-0 defeat at Bayern. Despite so many of the Barça team being relatively inexperienced youngsters, they managed to compete admirably well against the side that recently won the Champions League. But there is still room for improvement in terms of match fitness and sharpness up front, and the Valerenga game will be a very useful test for working on such aspects.

Barça arrived in Oslo on Thursday morning, and have continued with the same training schedule as before. Shortly after landing, the players made their way to the Bislett Stadion for a session behind closed doors, and there were a further two sessions on Friday. The morning’s session, at what will be the venue for Saturday’s match, was open to the public and drew a crowd of 1,500 people, while the final preparatory session before confronting Valerenga was back behind closed doors at the Bislett Stadion.