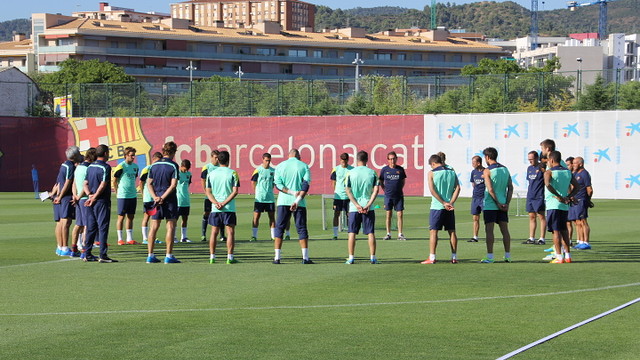 Like this morning, the nine first team players who participated in the Confed Cup and Javier Mascherano trained at the Ciutat Esportiva

In addition to the first team players, eight Barça B players and two Juvenil players took part in the session

The internationals who didn’t travel to Poland trained this Tuesday afternoon at 18.30. The session, which was marked with the news of Antoni Ramallets’ passing, started off with a minute of silence in remembrance of the legendary Barça keeper.

The internationals who participated in the Confederations Cup featured in this afternoon’s session, with the exception of Neymar who made the trip to Poland this morning. Mascherano, who featured in Barça’s first two friendlies, was not named to the squad for the match against Lechia Gdansk and trained alongside Valdés, Alves, Alba, Piqué, Busquets, Xavi, Iniesta, Cesc and Pedro.

The next session is scheduled for Wednesday at 9.00.