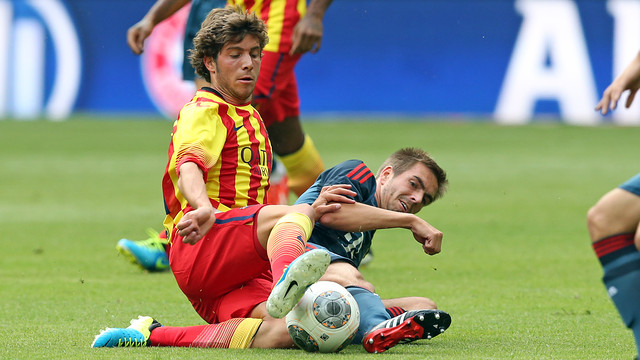 Sergi Roberto, who was named to the starting line-up against Bayern on Wednesday, is enjoying his first preseason as a member of the senior side. “It’s always special [to be part of the first team]. I’ll try to help the team as much as I can,” said the midfielder. When asked about Gerardo Martino, Barça’s new manager, Sergi Roberto said, “he did a great job with Paraguay and with Newell’s. He’s a manager who has confidence in young players and his teams treat the ball well. Therefore, I think he’s the ideal manager for us,” said Sergio Roberto.

The Catalan was honest when he was asked about Thiago Alcántara’s departure from the team: “It’s a shame Thiago left because he’s a good player. I wish him the best at Bayern and personally, I’m eager to see how many minutes I get on the pitch this season.” Sergi Roberto also had words for Tito Vilanova: “The news about Tito surprised us all. We have to leave it all behind and focus on this season, but we also send him our encouragement and we hope he recovers. Everything we do this season is for him.”