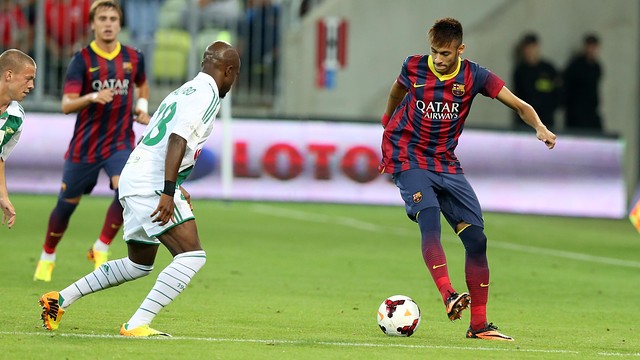 Sergi Roberto, who scored Barça’s first goal, said: “I have to keep working so that the manager continues to have confidence in me”

Neymar Junior played his first minutes as an FC Barcelona player this Tuesday. The Brazilian was subbed in for Alexis on the 78th minute in the match that saw Tata Martino’s men draw two-all against Lechia Gdansk. When asked about Barça’s new manager, Neymar said, “I had the chance to speak with him, he told me that he has confidence in me,” and he added that he needs some time to reach top physical condition. Neymar started training on Monday with the rest of the internationals who participated in the Confederations Cup.

In Gdansk it wasn’t possible to see him play alongside Messi, but Neymar didn’t miss the chance to talk about his Argentinian team-mate: “Messi is my idol, I’m very pleased that I get the chance to play with him.” Finally, the Brazilian talked about the upcoming Joan Gamper Trophy, which is scheduled for this Friday against Santos: “It will be a bit strange, but now I defend Barça’s colours and I’ll give it my all.”

Sergi Roberto is eager to improve

Sergi Roberto was one of the most active players against Lechia Gdansk. The midfielder scored Barça’s first goal and he put in a great performance. After the match he declared: “I have to keep on helping the team so that the manager continues to have confidence in me.” When asked specifically about Martino, Sergi Roberto explained: “We’ve only been able to speak with him for one day, but he gave us a good first impression.”