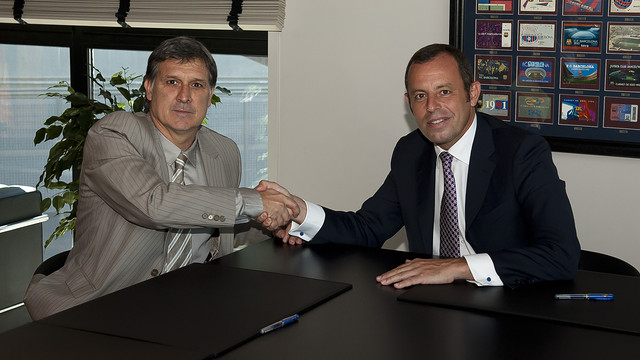 The Argentinian will manage FC Barcelona for the next two seasons

The signing was also attended by president Sandro Rosell, Andoni Zubizarreta and vice presidents Josep Maria Bartomeu and Carles Vilarrubí, among others

Gerardo ‘Tata’ Martino has signed his contract with FC Barcelona. On Friday morning, prior to his press conference in the Auditori 1899, he visited the offices to sign the agreement that binds him to the club for the next two seasons.

In Barcelona since Thursday

Martino landed at El Prat Airport on Thursday afternoon, and once in Barcelona travelled directly to the club for a photo session before the FC Barcelona crest. A large number of Newell’ supporters were also there to greet him.