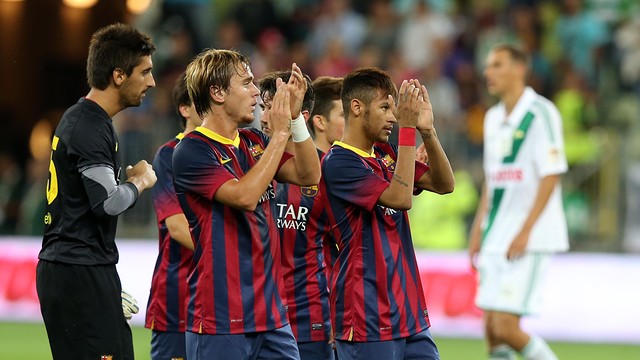 Barça drew away to a defiant Lechia side with goals from Sergi Roberto and Messi, while the new Brazilian star made his first appearance

July 30, 2013 is a date Barça fans will remember for two reasons. The first is a sad one, for one of the greatest players ever to represent the team, Antoni Ramallets, passed away today. A minute’s silence was respected in his honour in Gdansk, and the players wore black armbands. But this was also the day that Neymar made his Barça debut, coming on for the last fifteen minutes of a 2-2 draw at Lechia. Sergi Roberto and Messi scored Barça’s goals, both times to cancel out earlier efforts from the home side.

Barça started with the same eleven as in the two previous friendlies, other than Sergi Gómez coming in for the absent Mascherano at centre back. The side was still missing manager Tata Martino and all of the Spanish and Brazilian internationals, apart from Neymar. The game got off to a frenetic pace, with the visitors in control, pegging Lechia back in their own half. The first chance fell to Alexis from a corner, but his effort skimmed wide of the post. Shortly after it was from another corner that the Poles went ahead thanks to a thunderbolt of a header from Bieniuk.

The Lechia goal certainly stirred things up. The Polish side battled to defend their lead, while Barça proudly fought for an equaliser, with Messi and Alexis particularly active in attack, while the third striker, Tello, was forced off with an injury and replaced by Joan Roman. It was Montoya who finally found the leveller after 25 minutes, running into space ahead of Alexis and sending the perfect pass from the goal-line for Sergi Roberto to stroke the ball home.

Crosses from the by-line were proving to be Barça’s strongest weapon, but in the air, it was the home side that had the upper hand. Both Dos Santos and Messi had chances to grab a second just before the break, but things were still all-square when the whistle blew.

Unlike in the first two friendlies, there were no major changes to the Barça eleven at the start of the second half. Oier came on for Pinto in goal, and that was all. In fact, it was Lechia that made more changes, and once again made good of their physical superiority.  In the 50th minute, Grzelczak broke free from Montoya and slammed the ball past Oier from the narrowest of angles. The home fans started believing in a famous triumph against the Liga champions, but Messi soon dampened the mood in the stands when he finished off a fine team move in the 56th minute with a deft flick before the home keeper.

Having thwarted another Polish lead after 61 minutes, Messi squandered a golden opportunity following a delightful combination with Sergi Roberto and Adriano. The Argentinian was one of just two ‘survivors’ (Alexis was the other) of a mass substitution ordered by caretaker manager Jordi Roura, with the rest of the team now made up of players from Barça B. Lechia, meanwhile, continued looking impressive, and created a series of half-chances on the counter attack.

One of the most awaited moments came in the 78th minute when new signing Neymar made his first appearance for Barça. Alexis and Messi had been taken off just moments before, meaning he was the lone first team player on the pitch. With the pace of the game by now much slower, and with what little rhythm there was constantly interrupted by some somewhat unhurried substitutions by Lechia, the Brazilian had few opportunities to show off his virtues, especially as he was on the receiving end of an extraordinary number of fouls considering the short time he was on the field. With Barça patiently pressing forward in search of a third, it was Lechia who almost nicked a winner right in front of goal in the final seconds. The chance went begging, and Barça’s third game of the preseason ended in a 2-2 draw.