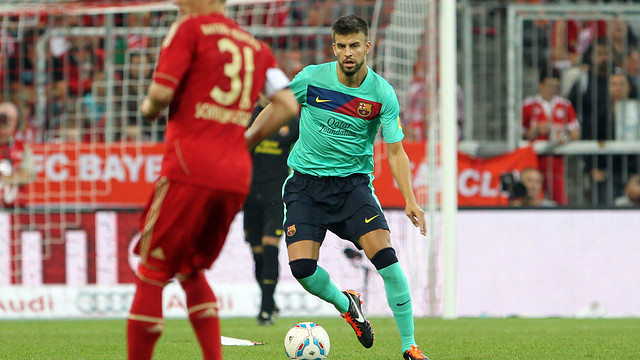 The 2013/14 preseason takes FCB to three European countries and two in Asia, as well as Israel and Palestine

Brazil’s Santos face Barça in the Joan Gamper Trophy on August 2, the last game of the preseason for Tito Vilanova and his team

Barça 2013/14 gets under way on July 15 with an intense preseason that will involve covering 30,000 kilometres. The following is a selection of trivia connected to the matches they’ll be playing:

-The team will travel more than 30,000 kilometres around the world in just 21 days.

– Barça start the preseason on July 15 in Barcelona where they will train until the 20th before playing the first friendly of the preseason.

-The first match will be at the PGE Arena in Gdansk, against local Polish outfit Lechia Gdansk on July 20.

– Barça will play the current European champions, Bayern Munich, on July 24. After that reencounter with former manager Pep Guardiola, they’ll be off to Oslo to play Valerenga in the Norwegian club’s centenary match on July 27.

-The Catalans will be in Israel and Palestine on August 3 and 4 for a football clinic.

– Barça start the Asian leg in Bangkok on August 7 against the Thai national side. Then on the 10th they’re in Kuala Lumpur to play a League XI before returning to Barcelona.

-The second Asian match will be played in the Bukit Jalil national stadium, which holds 100,000 people, and will be the first time FC Barcelona has ever played in Malaysia.

-The flight back to Barcelona will be the longest of the summer, no less than 10,589 kilometres.

– Barça play their first match on home soil in the Joan Gamper Trophy match on August 2. The opposition, Santos of Brazil, are appearing in the competition for the second time.