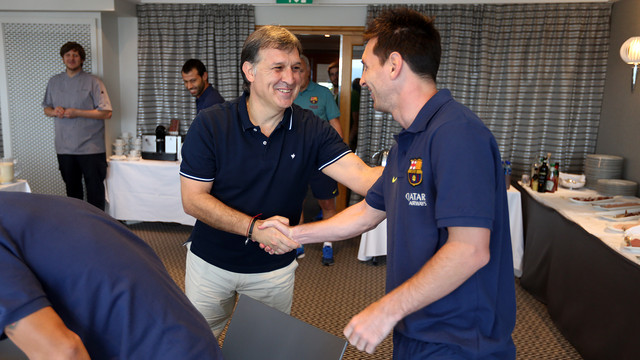 After flying in to Oslo on Friday night, Barça’s new coach individually greeted his staff and players this morning.

Tata Martino will watch this evening’s game against Valerenga from the stands.

Barça’s new coach, Gerardo ‘Tata’ Martino, met the squad and the coaching staff for the first time this morning in Oslo. The new boss met up with the players in the restaurant at the team hotel, The Radisson Blu Plaza, where they have been staying since Thursday.

Breakfast with the coaches and Zubizarreta

The get together took place at 10.30, as the players and staff met for breakfast . Martino met all the coaching staff and then greeted each of the 23 players individually, before sitting down at a table with his coaches and sporting director Andoni Zubizarreta.

Martino and Zubizarreta flew into Oslo on Friday night after the new boss had signed his contract with the Club.

Tata Martino will watch this evening’s game against Valerenga – the team’s second pre-season friendly –  from the stands.