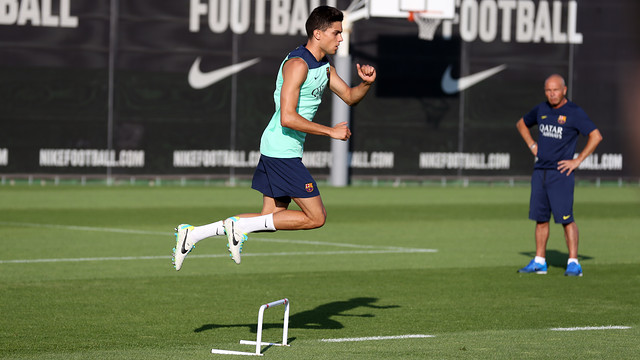 The Barça squad will train again this evening at 19.00. After that, the squad will be announced for the journey to Munich and Oslo.

With just a day to go before the start of the 2013/14 preseason at the Allianz Arena in Munich against Bayern, Barça have trained on pitch 1 at the Ciutat Esportiva Joan Gamper with the 23 available players. Apart from the 12 first team players, there are 11 B team players also working under the order of Jordi Roura and Rubi. Like in recent days, the session was mainly focused on fitness with some ball-work.

In the meantime, the three injured players continued their recoveries, Carles Puyol, Ibrahim Afellay and Isaac Cuenca in isolation from the other players.

The team’s preparing for their preseason debut on Wednesday night, following the cancellation of their fixture in Poland following the announcement that Tito Vilanova is stepping down as manager for health reasons. The first team will travel to Munich to face a Bayern team featuring ex-FCB men Pep Guardiola and Thiago Alcántara at 18.30. After that, Barça will travel on to Norway where they have a game with Valerenga next Saturday at 19.00 in the Ullevaal Stadion, Oslo.