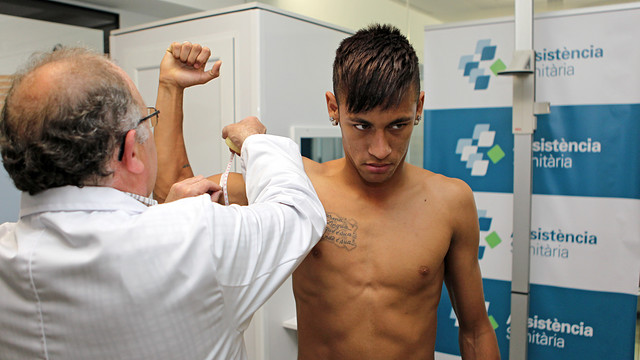 The ten players who played in the Confederations Cup began their pre-season with medical tests.

The medicals were Neymar’s first contact with his new team mates.

Tata Martino met up with the whole squad and gave his first tactical talk.

The ten players who played in the Confederations Cup began their pre-season with medical tests this morning. The Brazilians Alves and Neymar and the Spanish internationals  Valdés, Jordi Alba, Piqué, Sergio Busquets, Cesc, Iniesta, Xavi and Pedro  were put through various tests, including  an echocardiogram, strength test,  muscle and bone echo graphs and a bone densitometer examination.

The players began their tests at 8.30 and then moved oin to the Medical Centre at the Ciutat Esportiva.

It was also Neymar’s first contact with his new teammates, although since he passed a medical before signing earlier this summer, he only had a foot examination and a densitometre examination.

Before the medicals, the whole squad got together on Training Pitch Number 1 ,where new coach Tata Martino gave his first tactical talk to the players.

Once the medicals are over the players are due back for training with the rest of the squad at 19.00 this evening