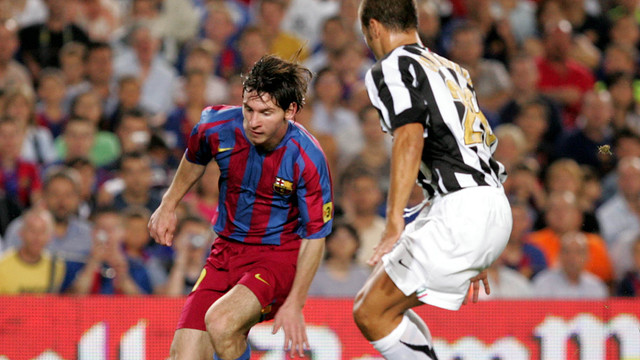 There’s less than a month to go before the 48th edition of one of football’s oldest summer tournaments, which this August 2nd will bring together Barça and Brazilian giants Santos. We’ve selected ten highlights from the history of the Joan Gamper Trophy to whet your appetites!

The Joan Gamper tournament was first held in 1966 and featured FC Barcelona, FC Cologne, RSC Anderlecht and FC Nantes. Barça won this first tournament by beating the Germans 3-1 in the final.

The match between FC Barcelona and Boca Juniors in 1984 ended 9-1 and is still the biggest win in the 47 years of the tournament. Seven different players found the net for Barça (Archibald (2), Alexanco (2), Schuster, Calderé, Carrasco, Esteban and Marcos) while Morena got a consolation goal for the Argentines.

Jordi Roura plays the Gamper in 89

On 23rd August 1989, FC Barcelona and Internacional Porto Alegre met to decide third and fourth place. In the 53rd minute, a youngster called Jordi Roura came on for Julio Salinas. It was the first and last appearance in the Joan Gamper for the man who is now the assistant coach of the first team. As for his current boss, team manager Tito Vilanova, he never took part in the tournament as a player.

The Camp Nou has always been one of the defining characteristics of the Joan Gamper Trophy but on two occasions (1990 and 1996) it has been held in Barcelona’s Olympic Stadium due to building works in the Camp Nou.

For the first thirty years of its existence, the Joan Gamper was a four-way tournament, with two semi-finals and a final plus the match for third and fourth place. The last tournament to be held with this format was in 1996 with FC Barcelona, FC Internazionale, RSC Anderlecht and CA San Lorenzo Almagro. Barça won the trophy with a 2-1 win over Inter. Since 1997, the tournament has been decided by a single match between Barça and one invited opponent.

The first time for Santos

The Brazilian club first took part on 25th August 1998 and after 90 minutes the score line was 2-2, the goals coming from Rivaldo and Figo (Barça) and Anderson and Ariel (Santos). Barça went on to win the penalty shootout 5-4. Next month, FC Santos will participate for the second time.

Messi makes the grade in the 2005 Gamper

It was Leo Messi’s first big night. In 2005, at the age of 18, he formed part of the starting line-up in the match against Juventus. Messi’s performance that night endeared him to the Camp Nou faithful and even won praise from the Juventus manager, Fabio Capello.

The match against AC Milan in 2011 ended in a 1-1 draw and set the scene for Barça keeper José Manuel Pinto to astonish the watching fans. He stopped three penalties in the deciding shootout (from Pirlo, Seedorf and Jankulovsk) to hand Barça the 45th Gamper Trophy.

Nearly 900 days after his last appearance in the Camp Nou, Ronaldinho came back to the stadium in the colours of AC Milan for the 2010 Gamper. It was a great opportunity for the fans to pay homage to the Brazilian forward and at the end of the match Carles Puyol gave the trophy to Ronaldinho as a souvenir of an unforgettable night.

Cesc Fàbregas’s first match for FC Barcelona ended in a 5-1 win against Napoli in the 2011 Joan Gamper. Cesc scored that night to add to goals from Messi (2), Seydou Keita and Pedro Rodríguez.