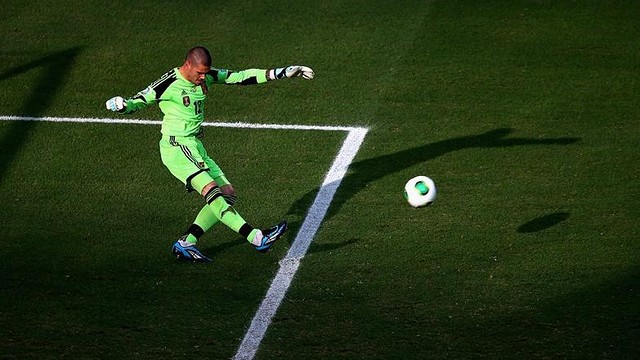 The nine FC Barcelona players will be finalists if they win Thursday night’s semi-final with Italy (21.00, Telecinco)

Spain face Italy tonight (21.00) in Fortaleza in the second semi-final of the Confederations Cup, where the two sides will be battling for a place in the final against host nation Brazil at the Maracaná in Rio de Janeiro.

Valdés, Piqué, Sergio, Iniesta, Cesc, Xavi, Jordi Alba, Villa and Pedro are all looking to help Spain to the one major title the country has yet to win.

Spain stormed through their group with maximum points. David Villa is the top scoring FC Barcelona player to date after getting a hat-trick against minnows Tahiti.

Italy came second in group B after losing 4-2 to Brazil, with FCB’s Neymar and Alves in the home side. One of their weak points, and unusually for an Italian side, is clearly defence, where they have leaked eight goals in their first three outings. They are also being troubled by injuries. Mario Balotelli and Ignazio Abate are already out of the Spain match, and things are looking doubtful for Riccardo Montolivo and Andrea Pirlo.

The game is, of course, a repeat of the Euro 2012 final, where Vicente del Bosque’s cruised to victory 4-0, with two of the goals coming from Jordi Alba.

In 31 meetings all-time, Spain have nine wins, Italy have ten and 12 games have ended in draws.

Neymar and Alves already there

The two teams already know what to expect in Sunday’s final. It’s none other than host nation Brazil, who struggled to win last night’s semi-final against a determined Uruguay side, eventually winning 2-1 to seal a place in the final of this competition for the fifth time. Both Neymar and Alves are expected to start on Sunday night.