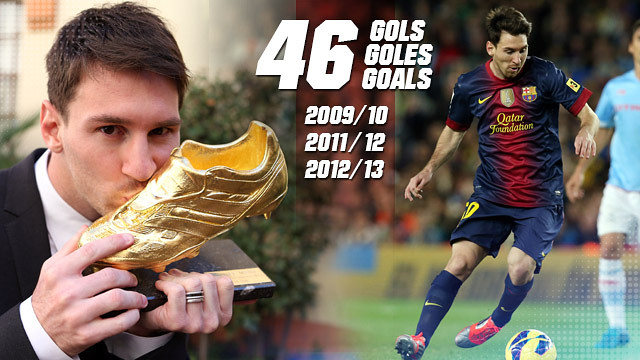 The injury Leo Messi picked up at the end of the season didn’t stop the player from putting up exceptional numbers for FC Barcelona this year. The Argentinian claimed the Pichichi trophy after scoring a total of 46 goals in the league, and he also won the coveted European Golden Shoe, an award given to the top goalscorer out of all the domestic European leagues. This is the third time Messi has won both awards.

92 points in the European Golden Shoe

Cristiano Ronaldo is the runner up for both awards. In La Liga, Messi outscored the Portuguese player by 12 goals, while in the standings for the Golden Shoe, the Argentinian has Ronaldo beat by 24 points (each goal in the major European leagues is awarded two points). Messi notched up a total of 92 points, to Ronaldo’s 68, Cavani’s 58, Falcao’s 56 and Van Persie and Jackson Martínez’s 52.

In the last couple of seasons Leo Messi has been hauling in record-breaking amounts of goals each year. Here’s a quick look at his goal average for the past five seasons: